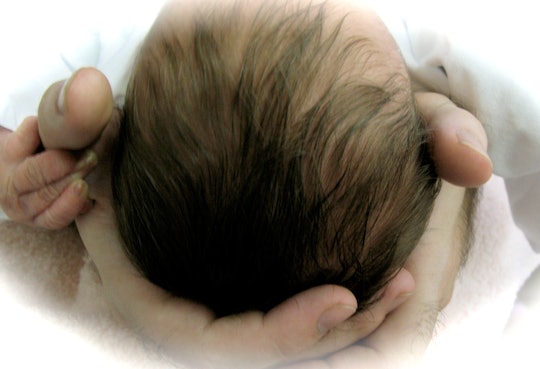 Is My Newborn's Soft Spot Supposed To Pulse?

As if you weren't already terrified of having a delicate newborn to keep alive, now you've discovered that they basically have a self-destruct button on top. OK, so your newborn's soft spot isn't that serious, but it feels that way. I'll never forget running my hand over my newborn daughter's head, feeling that soft spot, and immediately freaking out. I mean, it's just right there, out in the open. How do I know if it's OK? Is it sunken in? Is a newborn's soft spot supposed to pulse?

Alright, first things first. Don't panic. I know that your baby's soft spot is totally weirding you out, but if it's pulsing, there's nothing to worry about. According to Parenting, you may notice it pulsing because of the blood and bodily fluids that are passing through it, just like you can notice your own veins in your wrist pulsing.

What to Expect also notes that you may see your baby's soft spot, which is just a gap between the bones of your baby's skull to give it some flexibility during childbirth, pulsing in time with their own heartbeat, or even bulging out if your child strains to poop. All totally normal, despite the alien vibes it may give you.

If it really bothers you, keep in mind that the pulsing should stop when the bones fuse together. According to Parents, the soft spot at the back of the head will fuse around four to eight weeks and the one on the top can fuse from nine months to two years. In fact, the only time you really need to worry about your little one's soft spots is if they are sunken in notes Today's Parent. This can be a sign of dehydration and your little one may require medical attention.