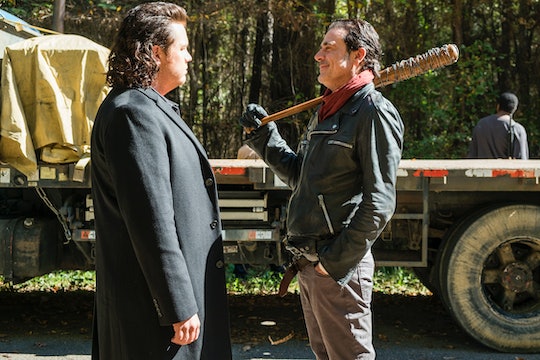 Negan May Be Sticking Around On 'The Walking Dead'

As The Walking Dead heads into its Season 7 finale and fans prepare to obsess over probable cliffhangers and Season 8 theories, viewers are already beginning to wonder which cast members we can expect to see return for the upcoming season. Of course, nothing is certain with this show, which loves to kill off long-term beloved characters at the drop of a hat (definitely not still bitter about Glenn's death, no sir). In particular, much of the fanbase is wondering about Negan's future on the show. Is Negan returning for The Walking Dead Season 8?

Ever since he was first introduced in the gory and deadly Season 6 finale, fans have been divided on whether they love, hate, or love-to-hate Negan as a villain, in spite of Jeffrey Dean Morgan's undeniably charismatic portrayal of the character. After continuing to terrorize Rick and his group of survivors from the moment of his first appearance and onwards, a solid subset of viewers are very much ready to see Negan's undoubtedly satisfying death, preferably at the hands of someone he's spent weeks torturing, like Daryl, or ideally a rightfully vengeful Maggie.

Unfortunately for those who are ready to see smirking Negan and his terrifying bat Lucille go, his portrayer has already been confirmed for Season 8. "I know I will be on board for season eight," the actor said during an appearance on Howard Stern back in November. "We’ve finished [season seven] a week ago. The next two, I’m really big in. I’m f*cking heavy in those."

While disappointing for some who are ready to see Negan finally get his, this news isn't exactly unexpected for those TWD viewers among us who have also read the comics. Now, the showrunners don't always follow the comics to a T (baby Judith, for example, has outlived her comics counterpart by a mile, while the reverse is true for both Andrea and Sophia). Negan's fate in the comics has yet to be sealed, despite the fact that the "All Out War" arc has come and gone. Whether that means Negan will be appearing in the eighth season and beyond (as the source material indicates) or dying in a surprise-divergence from the comics at some point in the upcoming season remains to be seen.

In any case, one thing's for sure — Negan's still got a trick or two up his sleeve. And I guess another season or so of JDM's disarmingly suave smile can't hurt too much.