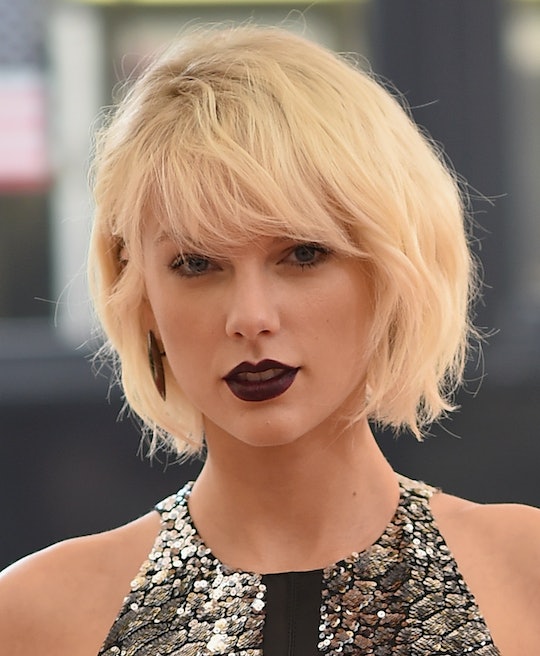 It's official; Taylor Swift's new album has *finally* dropped. The entire track list for Reputation became available at midnight on Friday, which is a good thing because after waiting for three years, I don't know how much longer fans would have been able to wait. Not just for the actual music; Swift being Swift, fans were obviously just as excited to dig into some sweet theories about her possible song inspirations as they were to hear the new tracks. And one song seems to be getting fans particularly excited, because there's a theory that "New Year's Day" could be about an engagement. Which would mean Christmas has truly come early for the Swifties.

So why does "New Year's Day," track 15 on the Reputation album, have fans thinking that Swift might actually be engaged? Well, for one thing Swift is reportedly in a super lovey-dovey, happy relationship that started almost a year ago with British actor Joe Alwyn. While neither Alwyn nor Swift have gone public to officially confirm their romantic involvement, Swift has been spending a significant amount of time in London, where Alwyn is based, over the past year, and sources say he is the reason for her transcontinental frequent flyer miles. A source close to Swift even told People recently:

It’s a great relationship that everyone hopes will last. Joe could definitely be the one.

Romper has reached out to Alwyn's rep for comment on their rumored relationship and is awaiting a reply.

While the couple continues to lay low and avoid a whole lot of press attention, Swift seems to be perfectly comfortable singing her love for Alwyn from the proverbial rooftops, if fan theories are to be believed. Several songs on the Reputation album carry strong allusions to Swift's happy love life, like these lyrics from the song "Call It What You Want;"

I want to wear his initial on a chain 'round my neck / Not because he owns me, but 'cause he really knows me / Which is more than they can say.

Swift also seems to sing about Alwyn in the songs "Gorgeous," "King Of My Heart," and "...Ready For It?" But it's "New Year's Day" that has fans speculating that an engagement might be in the works. The lyrics, seemingly based on the morning after a New Year's Eve party, do appear to point to something slightly more permanent for Swift and Alwyn:

There's glitter on the floor after the party/ Girls carrying their shoes down in the lobby/ Candle wax and Polaroids on the hardwood floor/ You and me from the night before, but

Don’t read the last page/ But I stay when you're lost, and I'm scared/ And you’re turning away/ I want your midnights/ But I'll be cleaning up bottles with you on New Year's Day

You squeeze my hand three times in the back of the taxi/ I can tell that it's gonna be a long road/ I'll be there if you're the toast of the town, babe/ Or if you strike out and you're crawling home

Fans are convinced these lyrics point to an engagement between the "Shake It Off" singer and her British beau, but honestly, it could just be wishful thinking.

It would be an interesting way for Swift to announce her engagement, via her sixth studio album. And, of course, no one is saying whether or not the two are engaged, although there are rumors that Swift is planning on breaking her radio silence and bringing Alwyn out into the open at her side in the near future.

But there is this other theory about "New Year's Day" that could make sense as well; some fans think the song alludes to Swift's short-lived relationship with singer Harry Styles, which ended (rather coincidentally) over the holiday season.

Either way, fans are pretty much just excited to have new Taylor Swift songs to theorize about. Really, it's been far too long.