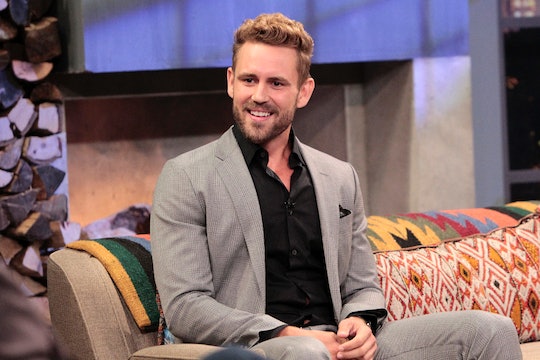 Reality show stardom is fickle. While some stars are able to capitalize on their 15 minutes of fame, spinning an entire career from it, others fade into the background and become mere ghosts of unscripted TV's past. Nick Viall apparently belongs to the former category, taking his always-a-bridesmaid-never-a-bride shtick (with three separate Bachelorette/Bachelor in Paradise appearances failing to translate into an actual relationship) and using it to become the franchise's golden boy. At this point, he's basically a professional contestant, though he actually worked one of the most "normal" jobs, pre-Bachelorette Season 10. But is Bachelor Nick still working, outside of his reality TV appearances?

When Nick first graced our screens, the year was 2014 and he'd been working as an account executive at SalesForce, in the software sales sector, since March 2013 (according to his still-active LinkedIn profile). I can't imagine how Nick possibly finds time to work a regular job while appearing on multiple seasons of reality TV (and doing the accompanying press rounds that come with it all). Yet, it appears that Nick is still technically an employee of the company — or, rather, his LinkedIn profile still lists him as working with the company. SalesForce must have a seriously generous leave of absence policy. Appearing on The Bachelorette (twice), Bachelor in Paradise, and The Bachelor while lasting to the end every since time would've required months' worth of time off.

It's unclear how closely Nick is still affiliated with the company. As recently as June 2015, he was definitely still considered an employee — the Bachelor posted on Twitter and Instagram about SalesForce treating their whole office to a U2 concert. That means he was still working there after appearing on both Andi Dorfman's season (10) and Kaitlyn Bristowe's season (11) of The Bachelorette.

In a January 2016 interview with Bustle, several months before Nick returned to Bachelor Nation to woo (and dump) Jen Saviano on Bachelor in Paradise, he was at peace with potentially returning to being an ordinary software salesman once again. Nick noted that he was on leave from SalesForce, which had been "very supportive" of his reality TV endeavor, but mentioned in the interview "that SalesForce has the right to not bring him back if he decides he wants to return" to the company.

But even if Nick chooses not to return to SalesForce (or the company declines taking him back after his leave is up), he has plenty of other irons in the fire. He's proven himself a hot reality show commodity, consistently bringing in viewers and a solid fanbase (with those who love him and those who love-to-hate him). I'm sure The Bachelor producers would fine something for him to do if, somehow, this season doesn't work out for him.

Beyond that, Nick has even branched out into other aspects of the entertainment industry, taking up modeling — he's signed with Wilhelmina, one of the most well-known and reputable agencies in the biz. And, of course, Nick knows a thing or two about monetizing his ever-growing social media following. He'll definitely have plenty to fall back on if he ever tires of appearing on TV — or if the audience ever tires of him.