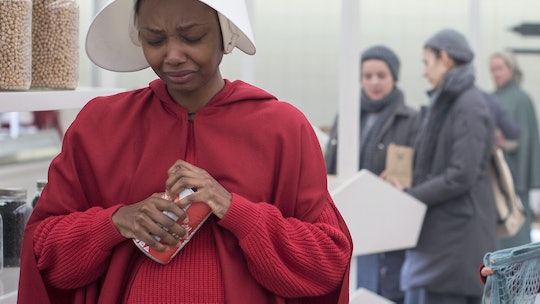 Listen, Ofmatthew Didn't Deserve That Ending On 'The Handmaid's Tale'

Is it me or did the Jul. 10 episode of The Handmaid's Tale just feel like a dystopian sequel to Mean Girls? In the episode, titled "Unfit," June and the other handmaids bullied Ofmatthew, the woman who snitched on June and subsequently got Hannah's Martha killed. As a result, Ofmatthew snapped, attacked Janine, held June and Aunt Lydia at gunpoint, and murdered a guard before being shot herself. As the guards dragged away Ofmatthew's seemingly lifeless body and the episode ended with yet another ominous close-up of June, fans were left wondering if Ofmatthew is dead on The Handmaid's Tale. The preview for the upcoming episode on Jul. 17 says it all.

The Handmaid's Tale Season 3 Episode 9 promo instantly reveals Ofmatthew's fate. Although it looked like Ofmatthew was shot in the shoulder, the pregnant handmaid— whose identity has now been confirmed as Natalie — is brain dead. The trailer starts off with a clip of Ofmatthew hooked up to machines in a hospital bed. And of course, sitting directly across from her is her walking partner.

"Her brain is gone, they say" June's voiceover states. "I will be here until there's a baby."

Despite Ofmatthew's status, Gilead is keeping her body alive until she gives birth to her baby. As of now, she truly is nothing more than an incubator, and June has to bare witness to every horrifying moment.

Throughout the eighth episode of the third season, fans were torn about Ofmatthew's character. Some took joy in the handmaids' relentless bullying of June's walking partner, while others understood that she was just brainwashed and trying to survive. However, most fans agreed that Ofmatthew's final moments were devastating, no matter how you looked at it.

In an interview with Refinery29, Ashleigh LaThrop explained Ofmatthew's breaking point in "Unfit," and to be honest, LaThrop's interpretation is even more heartbreaking than what was shown on screen.

"The bullying has gone on for weeks. She doesn't have anyone to cling to — no friends, no family, no aunts. When she kills the guard, there’s no going back. OfMatthew recognizes that," LaThrop said. "She’s pointing the gun at people like it’s a cry for help: 'Someone needs to help me, I just want to live, I just want to raise my baby.'"

When she looks at June, OfMatthew in her warped mind is saying, ‘If you and I can be together in this again, we can get out and get my baby out.’ OfMatthew believes that if she kills Aunt Lydia, they can escape, because June obviously has a way. That’s the secret hope OfMatthew has always had: June will provide that information for her. We’re going to finally take action. We’re going to get out. We’re going to escape, and I’m going to raise this baby.

Ofmatthew's annoyingly pious behavior may not have made her a fan-favorite on The Handmaid's Tale, but her story is just as horrifying and poignant as any other handmaid's on the show.

"My hope is is that [fans] will, for all of their dislike, still have empathy for this person," LaThrop shared with Bustle. "I hope that they will. Even if she's not likable, she is pitiable, as are all of the handmaids and really anyone in the society deserving of empathy — because it's a garbage society."