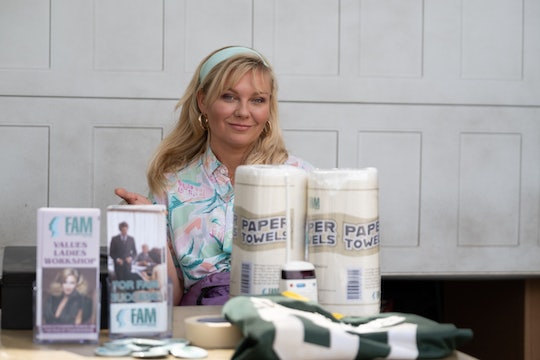 Whether you call them pyramid schemes or multilevel marketing opportunities, they are all around us. These alleged work-at-home jobs come in the form of selling products, services, or a little of both. Although On Becoming a God in Central Florida takes place in the '90s, it’s still relatable today. The story of one woman’s climb up the pyramid ladder seems like it’s ripped from the headlines. Naturally, it made me wonder if On Becoming a God in Central Florida is based on a true story. The Showtime series, which premieres on Aug. 25 at 10 p.m. ET, is about how one company’s supposedly life-changing business model changes and ruins the lives of those it touches.

While the show isn't based on a true story, it does draw inspiration from the reality of how these schemes touch people’s lives in the real world and how they have for decades. On Becoming a God in Central Florida showrunner, Esta Spalding, spoke at the at the Television Critics Association summer press tour about how the show hits close to home for people in real life because of its subject matter, even if the show itself is a fictional story.

"These kinds of schemes are all about people being asked to monetize their relationships," Spalding said. "What’s heartbreaking is not only the debt and the loss… The losses become familial as well." She added that in the show, the characters are "being preyed upon" by the executives behind the fictional Founders American Merchandise company because they are after better lives for themselves.

The show isn't based on a true story, but On Becoming a God in Central Florida does give some insight into how these "opportunities"affect people in real life. If you have ever been a part of one of these schemes or were the recipient of a seemingly well meaning Facebook message from a "friend" about whatever service or product they were peddling, then you know the drill.

Although the Showtime dark comedy focuses on all of the players in the pyramid scheme game, from the very bottom to the top, the central character is Krystal Gill (Kirsten Dunst). She is a minimum wage earning employee at a water park who sees Founders American Merchandise as a way to get out of her rut and make something of herself. After she sees the way the company negatively affects her husband before his death, she works to climb to the top of the pyramid. Her goal is to expose the company for what it does to innocent people, but judging by the trailer, she becomes infatuated with the company and its promises herself.

Mel Rodriguez, who plays Ernie on the show, said he grew up in Florida witnessing multilevel marketing schemes similar to the one seen in On Becoming a God in Central Florida. "There is a real hopelessness," he said in an interview with The Waterloo-Cedar Falls Courier. "These are people living paycheck to paycheck... and this is the falsehood of the American dream." He said his own mother was taken advantage of by an essential oils company because she was led to believe she could make a career out of using other people to buy these products.

That unattainable American dream is the focus of the show and although On Becoming a God in Central Florida is a fictional story, it shows just how delusional these victims can get because of what they are promised by the higher ups in these companies.

On Becoming a God in Central Florida airs on Sundays at 10 p.m. ET on Showtime.