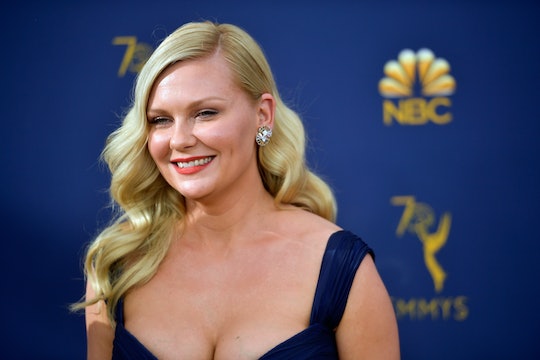 When I was raising my little boys on my own, one of my favorite things was to go to work. There. I said it. I worked as a waitress and it was very relaxing to have just one thing to do, this task of bringing people their food, wiping down tables, bringing more people food, etc. For me, it felt more straightforward than the millions of tasks at home, but I'm not saying I don't love my kids. Just like Kirsten Dunst isn't implying she doesn't love her baby boy. Dunst said work is "easier" than staying home with her baby, and honestly I bet there are so many moms out there who are saying a silent thank you to the Bring It On actress for voicing what is in their own heads.

The actress is currently starring in the Showtime series On Becoming A God In Central Florida. She is also a mom to 14-month-old son Ennis Howard Plemons with actor fiance Jesse Plemons, according to Harper's Bazaar. During an interview with reporters at the Television Critics Association Summer 2019 Press Tour, Dunst opened up about what it's like to be a working mom and it all sort of boiled down to one sentence for her, as per People, "I'm just tired all the time."

Dunst went on to admit that she has found working on set considerably easier than staying home with her little boy. She noted in her interview with People that when she was able to leave Ennis with a family member: "I was like 'Bye!' to my mother-in-law, I was like 'Phew!'"

Also doing the show too, it’s so much easier to go back to work than it is to be a stay at home mom.

Coincidentally enough, Dunst was on set playing single mom Krystal Stubbs in her new Showtime series, which she said was "hard" but fortunately she had loads of support in her life, as per People:

I basically went for the hardest thing that I could possibly do after having a baby. I was with this role for two to three years. For me, it was just the perfect time frame. I had family and friends to help me.

It's obviously not fair to say that every mother feels as though going back to work is easier than being home with their kids. Perhaps on account of the fact that every mother is different. Dunst herself might even be surprised to feel this way considering she told Marie Claire UK in 2017 that she was getting ready to "chill" with a baby:

I’m at a stage in my life where I’m like, I’ve been working since I was 3. It’s time to have babies and chill. You know what I mean?

I think this is sort of the glamorized version of what many people think parenting is going to look like before it actually happens. Hang out with a baby, relax. Slow down. But this is not reality for everyone. Parenting is hard work and it changes all the time. Just when you think you've figured it out your kid suddenly seems different and then it's back to the drawing board.

Kirsten Dunst admitting that going to work is easier than staying home with her son might not be the most popular thing to say... but for some of us it rings so very true.