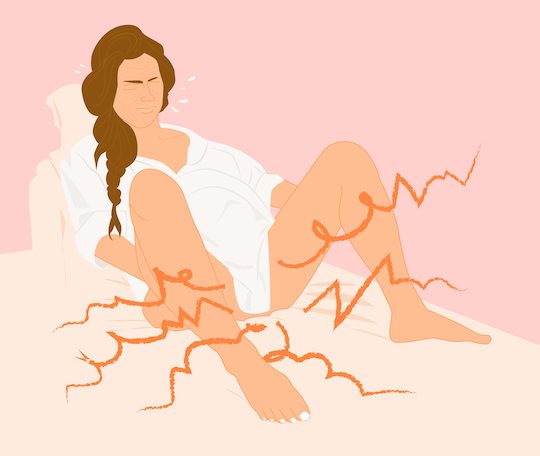 Is Orgasmic Birth Real? Yes, But It May Not Be What You Think

An orgasm may eventually lead to childbirth, this much is true. But you might've also heard that an orgasm can lead to labor. Crazy, right? But is orgasmic birth real or is this one of those things people love to tell you in an effort to either shock you, terrify you, or make you feel a little better about pushing an 8 pound human out of your vagina?

Childbirth is full of uncertainties. I don't actually think there's one part of birth that is the same for every woman. But when you mention the word "orgasmic," a lot of people balk at the idea. How on earth can you have an orgasm while you're in the middle of giving birth? And what about all of those jokes about never having sex again once you become a mom? Wouldn't an orgasmic birth negate all of that?

Turns out, an orgasmic birth doesn't necessarily mean you orgasm as you're giving birth or that you are on the verge of having one as you're in labor. The website Orgasmic Birth noted that in the book Orgasmic Birth: Your Guide to a Safe, Satisfying, and Pleasurable Birth Experience, an orgasmic birth is a broad enough term to encompass those who can feel their body contracting in an orgasm and climax during delivery as well as those who would describe their birth as "ecstatic." And yes, orgasmic births are very much real.

According to a 2015 article in the Journal of Holistic Nursing, orgasms during childbirth have been thought of as a type of pain relief, despite society not quite getting on board. But What to Expect noted that those who advocate for a natural childbirth have known that sexual pleasure can not only reduce pain, but speed up labor contractions and help a mother relax. Obviously, if you're going this route, you can't exactly have intercourse while you're in the middle of labor, but you can use clitoral stimulation (or even nipple stimulation) as a way to help with the pain. According to FOX News, any stimulation in the vaginal canal (even if it doesn't feel sexual) can help block pain.

But orgasmic births are not always sought after. Sometimes, they just happen. According to Live Science, a survey in the Sexologies journal found that 0.3 percent of births have orgasms witnessed by a midwife. When you think about the science of an orgasm, it makes sense that an orgasmic birth would be possible. The birth canal is stimulated along with your cervix, vagina, and clitoris. And, just like in an orgasm, you're experiencing uterine contractions that could feel pleasurable to some.

Because sexuality is such a hot topic among society, it's hard for people to realize that an orgasmic birth doesn't mean you have sexual feelings towards your child or childbirth. It's like feeling some kind of pleasure when breastfeeding — it's biology. Sometimes, it happens, but it doesn't mean there's anything wrong with you. To your body, all of these sensations elicit the same reactions, even if they are not sexual in the slightest to you.

In fact, The Independent noted that it's a very physiological thing for your genitals to block the pain by bordering on pleasure. Not to mention that as your body is flooded with oxytocin during delivery, your whole body seems to be wavering in some form of ecstasy, which can give you a full-body, euphoric experience according to Orgasmic Birth.

An orgasmic birth is real, but just like any other type of birth, it's not the same for every woman. You may feel absolutely zero pleasure during delivery and that's OK, too. But if you want to try an orgasmic birth as a method of pain relief, talk to your midwife or doula to find out how your incredible body can make it happen.