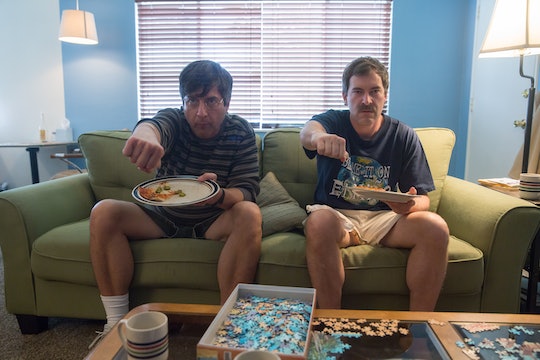 Ray Romano and Mark Duplass play best friends in Netflix’s new film, Paddleton, but their bromance is tested when one of them, Michael (Duplass) is diagnosed with a terminal form of cancer. The movie tells a heartwarming story about life, death, and friendship, which could easily be the premise of a great novel. So is Paddleton based on a book, or was it written specifically for the big screen?

Paddleton was written by filmmakers Alex Lehmann and Mark Duplass, and it was developed solely for the screen. The film — which first premiered at the Sundance Film Festival — is the first entry in the Duplass brothers’ four-picture Netflix deal, reported Variety, with Lehmann at the helm as director and Romano and Duplass on as executive producers.

The film follows Michael Thompson (Duplass) and Andy Friedman (Romano), two neighbors that bond over their love for kung-fu movies, microwave dinners, and their made-up tennis-style game called “paddleton.” The two middle-aged friends often find themselves talking about the hypotheticals of life, but when Michael is diagnosed with stomach cancer, their banter becomes more existential. Michael decides he wants to end his life on his own terms, and a skeptical Andy ends up becoming his caretaker.

If the movie feels to realistic to be scripted or pulled from a book, that’s because a majority of it was improvised. Romano and Duplass discussed the process of making the film for a Netflix press release, and in their conversation, they revealed how some of the dialogue was developed. “These movies are specifically underwritten, with the goal being you get a lot of surprises on set because you're not working from a traditional script, and you're improvising, and hopefully, that gives you more naturalistic dialogue, and more realistic chemistry,” explained Duplass. “The dramatic improv is my favorite part of these movies. Sometimes you're successful, sometimes you're not. Most improvisational movies are comedies that improvise for the purpose of hunting jokes. Whereas with this one we're just improvising so there's a little more fumbling, and it's a little closer to real life.”

Romano noted that while he has done improv in the past, this was his first time doing it it on such a big scale, which he admitted was daunting at first. “I was intrigued and nervous with the story that we were gonna do and also with the technique in which we were gonna do it, but it was a good kind of nervousness,” said Romano. “I've improvised in scenes, I've improvised in moments, but I haven't done it where, ‘this is how we do the movie.’ One thing that was good was we had some broad strokes of ideas going in, so it wasn't just totally cold. — I had to get used to doing the dramatic scenes unrehearsed, that, I thought, was dangerous, but ended up being great.”

Unlike a book adaptation, Paddleton was developed organically and specifically for the Netflix audience. It’s rare to see films created with such a realistic process, so if you’re watching, take a moment to relish in the improvisational genius Romano and Duplass are bringing to the screen.

Paddleton is now streaming on Netflix.