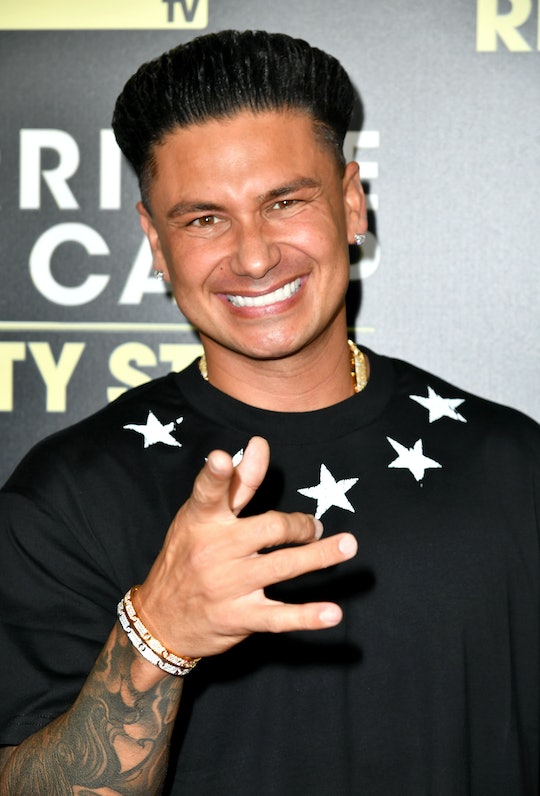 Ever Since Jersey Shore returned with Jersey Shore Family Vacation, Pauly D and Vinny's friendship has been one of the best parts. They are adorable together and now, on Double Shot at Love, they have each other's backs as they meet women to potentially fall in love with. But as a frequent bachelor, is Pauly D dating anyone now? The Jersey Shore star has kept a lot of relationships behind closed doors over the years, but he has had a few public girlfriends.

Although it's hard to say if Pauly D is dating anyone now that Double Shot at Love has finished filming, it's entirely possible that he found love in a hopeless place. I.e., on an MTV reality dating show. Pauly D most recently very publicly dated Danity Kane singer Aubrey O'Day, with whom he appeared on Marriage Boot Camp: Reality Stars. they originally met on Famously Single and both reported that their relationship was unhealthy. Now, they are officially broken up and Pauly D seems intent on finding a more stable relationship that meshes well with his five-year-old daughter.

Pauly D hasn't said anything on social media or otherwise about whether or not he found someone on Double Shot at Love and his Instagram is more of a tribute to his live shows than anything else. So for now, it looks like Pauly D is either back to the single life grind or keeping a relationship on the down-low.

Pauly D and Vinny both recently spoke to People about their experience on Double Shot at Love. Although Pauly D didn't say if he fell for anyone on the show, he did stress that his values for finding a partner have shifted slightly from simply finding an attractive girlfriend.

"I am more picky, because she has to meet the two most important women in my life — my daughter and my mother," Pauly D told People. "So it’s not just going to anybody. I think my mother has met like, two women in my life, ever. It’s a big deal for me."

We are officially living in a timeline where Pauly D is growing up and it's kind of amazing.

For a while, Jersey Shore fans speculated (and hoped) that Pauly D and Jenni "JWoww" got together after her separation from her husband. It would honestly be a match made in Jersey Shore Heaven and so many fans are here for it. But Pauly D shot that down quickly when he spoke to Us Weekly last month. He said that although Jenni is "a great girl," she's also "like a sister" to him and he wouldn't want to mess up their family dynamic by dating her. Once again, Pauly D is displaying some serious levels of maturity and I am here for it.

Unfortunately for some Jersey Shore fans, that means two of the formerly wildest stars probably aren't secretly dating. That doesn't meant Pauly D hasn't found love with someone else, but right now, it's hard to say if he's dating anyone after Double Shot at Love.

At the very least, Pauly D is ready to settle down and that says a lot about the former fist-pumping club rat. SallyAnn Salsano, who produced Jersey Shore and Family Vacation and created Double Shot at Love, told Hollywood Life that both Pauly D and Vinny are at a point in their lives where they are ready to find serious relationships.

They both have exciting careers that take them on the road, but when they come home from different gigs, it's now more important to them to be able to have something to come home to. So even if Pauly D didn't find his perfect match on Double Shot at Love, the fact that he's so open to it shows that it's only a matter of time before he settles down for good.