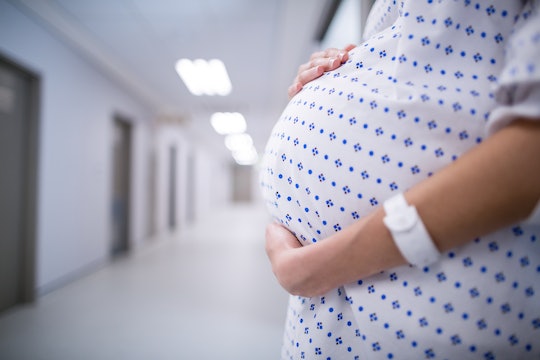 Here's How Having PCOS Impacts Your Pregnancy, According To Experts

For every pregnancy that isn't a surprise, there is a period of trying to conceive (TTC). Sometimes TTC doesn't take long; other times it does. It's frustrating to wait for a pregnancy to happen once you've made up your mind to be ready and women with polycystic ovary syndrome (PCOS) know what that's like — they generally take longer to get pregnant. Once it happens, you may continue to worry about having a successful pregnancy and healthy baby. In particular you may wonder, is PCOS a problem for pregnancy? The short answer is yes, some more serious than others. But it's important that you can understand how so you can feel prepared.

Over email, Romper spoke with Dr. Kurt Martinuzzi, an OB-GYN with expertise on PCOS. When trying to understand how PCOS could potentially affect a pregnancy, it's important to realize exactly what it is. (Other than a giant headache.) According to Martinuzzi, about 7 percent of women in the U.S. have PCOS. These cysts in the ovaries aren't out of the ordinary though — they are a normal fluid collection around developing eggs. "Most women have one egg come out of the ovary each month and if the pregnancy doesn't occur, they have a period of 14 days after the day the egg comes out — ovulation," he says. "Some women have an egg that starts to develop, but doesn't ovulate. The small cyst persists and the next month, another egg starts to develop, but also doesn't ovulate. Over time, women can get many little cysts in their ovaries — so-called 'polycystic ovaries.'" Martinuzzi adds that if you have more than 12 small cysts in an ovary, it qualifies as a polycystic ovary.

Because women with PCOS don't ovulate every month, this means it can take longer than average to get pregnant. Martinuzzi mentions there are medications to help women with PCOS conceive, including "letrozole, clomphene citrate (clomid), and metformin." He also notes that "PCOS by itself doesn’t increase the risk of twins, but if a woman needs clomid to become pregnant, she will have a higher risk of twins — around 7 percent."

Dr. Yen Tran, an OB-GYN with Memorial Care Medical Group, tells Romper that "birth control pills and metformin (diabetes drugs) [are used] to regulate periods and weight loss so [women with PCOS] can ovulate." According to Tran, doctors may keep a pregnant woman with PCOS on metformin for the first 13 weeks of pregnancy.

So it's not impossible to get pregnant if you have PCOS, but does this affect your baby? The journey to pregnancy may be more difficult for women with PCOS, but it turns out, that doesn't mean the pregnancy itself will be any riskier than usual. One of the biggest effects of PCOS on pregnancy is "increased risk for gestational diabetes," Dr. G. Thomas Ruiz, an OB-GYN with Orange Coast Memorial Medical Center tells Romper.

Martinuzzi agrees. "Women with PCOS are at increased risk for diabetes because many of them have inherited something called 'insulin resistance,' so they need to make extra insulin in order to get sugar into the cells," he says. "High insulin levels play a factor in throwing off regular ovulation. Pregnancy is a time of increased insulin resistance and all pregnant women are screened for diabetes caused by the pregnancy. For PCOS women, it is reasonable to screen for diabetes as soon as they become pregnant and then repeat the test when they are 24 to 28 weeks pregnant." Beyond that, Martinuzzi adds that "everything usually goes perfectly fine." He notes that there is a slight increase in early miscarriages in women with PCOS, "but once a fetal heartbeat is seen on ultrasound, then the great majority of women will carry the pregnancy to term."

All three doctors agree, however, that having PCOS is not a guarantee that you will have gestational diabetes or other complications. As Martinuzzi says, "Most women with PCOS will have uncomplicated pregnancies and deliver healthy, cute babies at term."

It seems like the real headache with PCOS and pregnancy is actually conceiving. If you're trying and are concerned about it, reach out to your healthcare provider for more info.