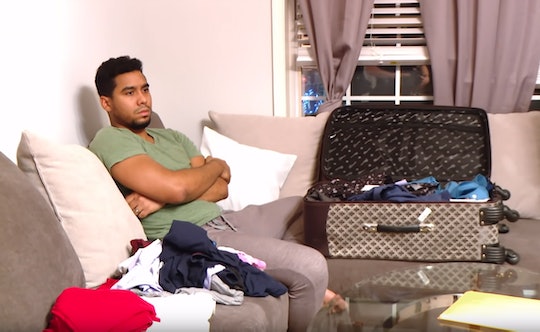 Pedro Is Back Home With His Family On ‘90 Day Fiance: Happily Ever After?’

Pedro and Chantel haven’t been getting along on this season of 90 Day Fiancé: Happily Ever After?, and it doesn’t look like things will get better anytime soon. In the last episode, Pedro was leaving to visit his family back home, but some of his comments suggested he wasn’t keen on coming back to Chantel. So is Pedro going to stay in the Dominican Republic?

As of now, there’s no way to tell for sure if or when Pedro returns to America, so fans will have to keep tuning into this season of 90 Day Fiancé: Happily Ever After? to find out. On the May 19 episode, when Pedro made it home to his mother and sister in the Dominican Republic, he looked really happy to be there, and he went on to tell his family that he wasn’t sure about his relationship with Chantel. “We have some problems” he tells them. “Honestly, it’s been very difficult for me to be there by myself. And after the fight we had, she’s only been on her family’s side. She’s never defended me.”

But when his sister, Nicole, asks Pedro if he still loves Chantel, he admits that he does. “I love my wife,” he says. “I love Chantel, but I’m actually afraid of continuing my life like this. Always problems, always arguments — I don’t know what to do about this. I don’t know.”

In a sneak peek for the upcoming episode, you can see Chantel unsuccessfully trying to get in touch with her husband, while Pedro is partying it up with another girl. He does seem to feel guilty about it when he says he thinks he “messed up,” which does mean that he’s still trying to keep his marriage intact. Either that, or he’s trying to ensure he gets his green card. In the last episode, when talking to an immigration lawyer, Pedro asked a few shady questions about getting his extended green card, which left Chantel questioning his true intentions.

If you’re turning to social media for clues on Pedro’s whereabouts, you’re out of luck, because both Chantel and Pedro have kept mum about their personal lives. They haven’t revealed any details about their current relationship status either, so it’s hard to gauge where they stand now. The only thing you’ll find in their recent Instagram posts are solo selfies and promotions for the show. And you’ll see that it’s been a long time since either of them shared a picture as a couple.

But there is one clue that hints Pedro’s return to Chantel. In a recent press release, TLC announced that they’re premiering a new series called The Family Chantel this summer. According to the network the show will be about Chantel’s family as well as Pedro’s. “Hot off their upcoming appearance on 90 Day Fiancé: Happily Ever After?, fan-favorites Pedro and Chantel and their lively in-laws will be the focal point of a spinoff series,” the TLC synopsis for the new show reads. “The family members featured in the upcoming series include Chantel’s parents Karen and Thomas and siblings River and Winter, as well as Pedro’s mother Lidia and sister Nicole.”

I’m assuming that the new series will see Pedro back in the United States with Chantel, because it wouldn’t really be fun to see them live separate lives in two separate cities. If this is the case, then it means that either Pedro’s love for Chantel or his need for a green card brought him back to America, but fans will have to keep watching through the end of this season to find out.