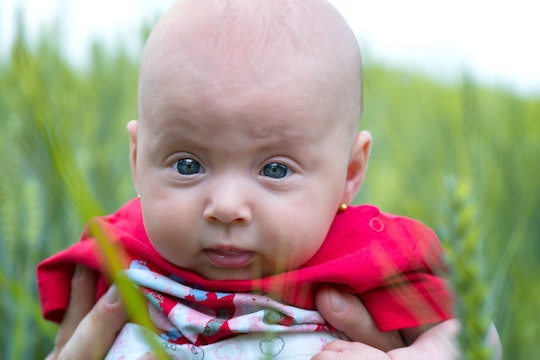 Is Our Objection To Baby Ear-Piercings Just Cultural?

I never gave a moment’s thought to the holes in my earlobes. They were there, with studs in them, just like my ears were. My ears were for hearing with, and my lobes were the carriers of earrings. It wasn’t until I was 35, living in Spain and expecting my baby daughter, when I was asked by my mother-in-law if we would be piercing our baby’s ears, that I even thought about it; I quickly gave a categorical “no.” The answer was a surprise to her, as it was to me — a woman who has had multiple ear piercings, a nose piercing, and a naval stud.

Ear piercing is ingrained in Spanish culture and a tradition when it comes to baby girls: in the olden days, nuns would pierce the ears of newborn girls before they even left the hospital; a traditional first gift from grandparents is a set of gold studs. So it was only natural that my decision met with some disapproval from my partner’s family. My evasion that I was from Great Britain where it wasn’t as traditional as in Spain was met with, “Well, you’re in Spain now.”

She’s right. I am in Spain, and it’s true, just today I saw a tiny baby on the Metro with two gold earrings in her ears. They looked so big on her, and I couldn’t help but wonder if they were uncomfortable, as she turned her head from side-to-side, looking for her next feed. When my daughter was born, so small and fragile, I didn’t even give her the Vitamin K vaccine, to save her the pain of a needle. (Admittedly, a decision I later regretted when I found out the oral drops had to be administered weekly for 12 weeks.)

According to Spanish midwife Maite Navarro, I needn’t have worried on the pain front. Maite, who has attended more than 10,000 births and boasts 20 years of experience in midwifery and nursing, also offers a service of “First Earrings: With Love, Without Pain.” I ask her if it’s really possible to pierce ears without it hurting. She insists it is, explaining that she has a series of tactics, including visual, sound and tactile stimulation, so that babies don’t feel the pain.

Up until 6 months of age, she says, “I have the tools to make sure they don’t feel pain.” From six months on, she collaborates with the child, singing, giving them a massage, playing with them. She says children don’t cry when she pierces their ears, because she “speaks their language.” (Later, I watched her pierce a baby’s ears online, and the baby did cry, albeit briefly.) She uses a sterile ear-piercing stud in a disposable ear-piercing instrument, which is hand-pressured and smoother than a gun.

I ask her if she thinks piercing baby girls’ ears is setting them apart from boys, teaching them that they need to be beautiful. She tells me she has three brothers and was the “princess” at home, but that didn’t make her “any less woman.”

“Whether or not you pierce your child’s ears is one of the many decisions you have to make on behalf of your baby as a parent, along with how you dress them, if and how you cut their hair, whether you feed them meat, get them vaccinated.”

'I’m a New Yorker, white Irish/Italian heritage and culturally, we don’t do that,' says Allison, a mother to two daughters ages 3-years-old and 11 months.

I asked other expat moms their opinions and experiences. No one called it “abuse” or compared it to female genital mutilation — something that occurred on Twitter recently when Khloé Kardashian pierced her baby daughter’s ears, and on live British television show This Morning in May. “Cruel”; “unnecessary”; “strange”; “tacky”; “trashy and kitch — like headbands with big bows” were some of the responses. Many moms had caved in to “pressure” from partners, and in-laws, while others had opted not to pierce their daughter’s ears despite what people thought.

As with anything, different countries have different traditions and customs. “I’m a New Yorker, white Irish/Italian heritage and culturally, we don’t do that,” says Allison, a mother to two daughters ages 3-years-old and 11 months. She, along with other moms, points out the apparently constant need for strangers to see earrings in order to identify the child as a boy or a girl.

“I have received the ‘I would’ve known she was a girl if she had had her ears pierced’ line from random strangers, to which I say, you can feel free to treat her as either gender as it really shouldn’t change the way you speak to her anyway. More than the piercing of the ears, what irks me the most is the need to know or identify a child is a girl... or a boy. It shouldn’t matter.”

Meanwhile, other mums — from Spain and elsewhere — said they loved earrings on baby girls, calling them "cute" and "adorable," adding that their daughters love their earrings. Mum to two daughters, Laura, says, "Both my girls have their ears pierced and they love their earrings and look lovely in them. They love it when I put on different ones for the special occasions." She expresses the sentiment that each parent must make their own decision, and respect others' views: "Live and let live!"

It is true that a small hole in the earlobe is pretty inconsequential (if it remains uninfected; note that the American Academy of Pediatrics recommends postponing ear piercings until the child is old enough to take care of the pierced site herself, for this reason). Yet, the fact remains that it is a perforation of the body, its only function being to embellish, and to ensure a baby or child is identifiable as female.

There is symbolism underlying the seemingly harmless stud; a reinforcement of the idea that a girl needs to look pretty — right from birth, right from when she is a pure, newborn baby. Before she can speak and walk and think for herself, she has already been put on the path of beauty and gendering.

In today’s society and climate, when women continue to be marginalized, and movements like #MeToo draw attention to the issues around consent and women's bodies, it appears more vital than ever to empower girls and teach them that their choice matters, never less than when it is to do with their own flesh. As one mom put it: “Her body, her choice.”

I love all my piercings. But I love the ones I chose, the most.