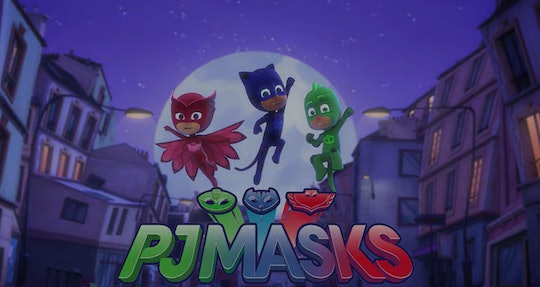 Mark Your Calendars: Season 3 Of 'PJ Masks' Is Coming To Disney+ This Month

PJ Masks has been a kid favorite ever since it came to Disney Junior back in 2015. What's not to love? Amaya, Connor, and Greg — who transform into superheroes Owlette, Catboy, and Gekko after nightfall — save the day again and again from the wrath of evils villains Luna Girl, Night Ninja, and Romeo. In the process, of course, the team learns valuable lessons that carry over into their everyday lives. And you can't forget that catchy PJ Masks theme song. But is PJ Masks on Disney+ and available to stream whenever your kiddos please?

Season 1 and Season 2 of PJ Masks are both currently available on to watch on Disney+ and each have 26 episodes. And — good news — starting on Sunday, April 12, Season 3 of PJ Masks will also be coming to Disney+, according to The Hollywood Reporter. And considering Season 3 premiered on Disney Junior only a year ago, that's a pretty quick turnaround.

Until Season 3 makes its way to Disney+ and you've watched the first two seasons on repeat enough, the streaming service has recently added some new hit flicks months before they were expected to. On March 15, Disney+ added Frozen 2 to its library and on April 3, Pixar's new animated film Onward also came to the platform, about a month after it premiered in theaters on March 6.

So when your kiddos make it through Season 3 of PJ Masks like two seconds after it drops on April 12, at least there should still be plenty of new-ish things to help keep them occupied on Disney+.