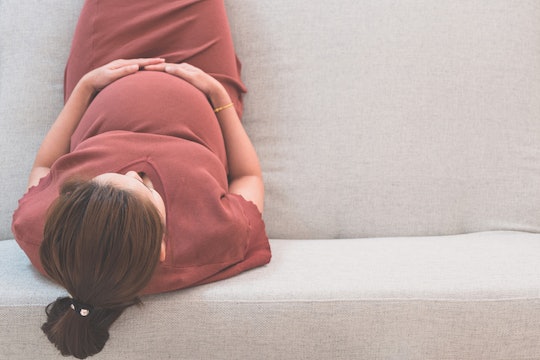 When I was pregnant I drove to the grocery store and wandered the aisles for nearly an hour before realizing I was wearing slippers instead of boots. This was in December; I should also mention that I went to the store just to buy milk, spent nearly $200 on food... and forgot milk. At different times during my pregnancy I forgot how to make change for a tip, got lost more times than I can count, and took my dog for her walk without a leash. Because I had pregnancy brain. And for those of you wondering if "pregnancy brain" is a thing, new research suggests it most certainly is a thing. And it's something that might happen for a super important reason.

David Haley, an associate professor of psychology from the University of Toronto, conducted a study to determine where the all-important (and somewhat mysterious) mother-baby bond began. Haley and his team of researchers studied the brains of 39 pregnant women in their third trimester between the ages of 22 to 39 and then studied them again three to five months after giving birth.

The women were shown pictures of infants and adult faces during these visits, both happy and sad, and their brain activity was studied to determine their response with an electroencephalography, according to the study. Researchers were specifically looking for reactions in the cerebral cortex, the part of the brain where information is processed.

Here is what they found; there was an uptick in response in their cerebral cortex when looking at the images of infants. Because the mother-infant bond was already developing in a woman's brain during her pregnancy, which seems to mean your brain is changing to adjust for your new role, according to MedicalXpress. As Haley explained in a press release for the study published by MedicalXpress:

Our findings support the idea that, in the brain, responses to infants' cues change over the course of pregnancy and early motherhood, with some mothers showing more marked changes than others. This variation in turn is associated with mothers' reports of their emotional bonds with their babies.

After the women gave birth, the study found that women who showed the most marked change in their cerebral cortex also reported stronger bonds with their babies, according to the University of Toronto's findings.

Now keep in mind that this aspect of the study relies on the new mothers' self reporting, but it does offer a little comfort to women who are struggling with so-called pregnancy brain issues. Instead of seeing this as a hindrance, perhaps mothers can give themselves a break and realize that their brains are changing for a seriously important reason: to give them the chance to bond with their babies.

This isn't the first study to show that the cerebral cortex goes through a significant change during pregnancy, as outlined by CNN, but it is the first to establish the link between that change and the emotional bond between mothers and their infants.

So maybe don't give yourself a hard time if you can't remember where you put your car keys while you're pregnant... your brain has more important things to figure out for the time being.

More Like This
Yes, It’s Possible To Get Pregnant If You Have An IUD
Pelvic Pain During Pregnancy: What Causes It & How To Deal With It
New Study Finds Brains Of Teens Who Lived Through The Pandemic Aged Faster
Here’s Why Your Vagina Itches At Night, According To Experts