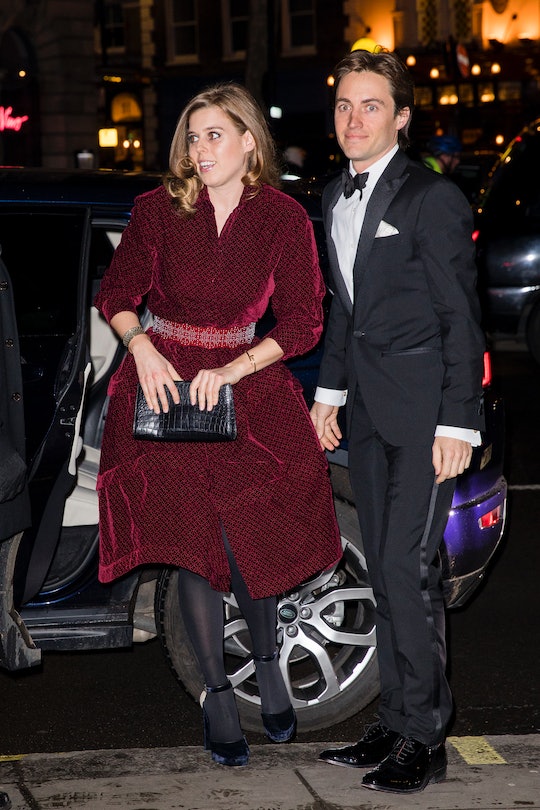 Another Royal Is Tying The Knot Soon: Princess Beatrice Is Officially Engaged!

Do you know what's been missing in 2019? A royal wedding that's what. In 2018 we got to enjoy not just one but two royal weddings and, honestly, it made my year just that much more delightful. Sure, Meghan Markle and Prince Harry blessed us with baby boy Archie in 2019, but royal weddings have been scarce. But I have good news for you: it looks like the Duke of York's daughter Princess Beatrice is engaged. Now if you're hoping that Princess Beatrice's fiance is royal as well, perhaps you might be vaguely disappointed. But at least she is royal and that's enough to get a group of fellow royals on the guest list, right?

On Thursday, Sept. 26, the Duke and Duchess of York officially announced that their daughter Princess Beatrice got engaged to boyfriend, real estate entrepreneur Edoardo Mapelli Mozzi, while the couple were on holiday in Italy last month. The Duke and Duchess of York released a statement on Instagram about the engagement, which read: "We are thrilled that Beatrice and Edoardo have got engaged, having watched their relationship develop with pride. We are the lucky parents of a wonderful daughter who has found her love and companion in a completely devoted friend and loyal young man. We send them every good wish for a wonderful family future."

Now, I'm sorry to tell you that they don't plan to get married until 2020, according to their engagement announcement on Instagram, which means we're going to have to accept our fate of zero royal weddings in 2019, but at least we have that to look forward to for next year.

Princess Beatrice's engagement news was initially shared on social media by her younger sister Princess Eugenie, who married her longtime boyfriend Jack Brooksbank last October at St. George's Chapel at Windsor Castle (the same place where Meghan Markle married Prince Harry in May of that year). It seems Princess Eugenie was responsible for the engagement photo of her older sister and her new fiancé and shared the happy news on Instagram with pictures and a statement from the couple.

"We are extremely happy to be able to share the news of our recent engagement," the statement read. "We are both so excited to be embarking on this life adventure together and can’t wait to actually be married. We share so many similar interests and values and we know that this will stand us in great stead for the years ahead, full of love and happiness."

The couple have been together since last September, when they met through a mutual friend, according to The Sun. They apparently already had several friends in common, which makes sense when you consider she is a member of the British monarchy and he is a multi-million dollar property "tycoon," according to the BBC. Mozzi is also a father to a 2-year-old little boy named Wolfie, according to The Daily Express, which means Princess Beatrice is about to become a stepmother. A rare title for a member of the royal family, it seems; more proof that times are changing.

Now we just need to find out when exactly the wedding is going to take place so we can start talking tiaras, wedding cakes, dresses... it's going to be glorious.