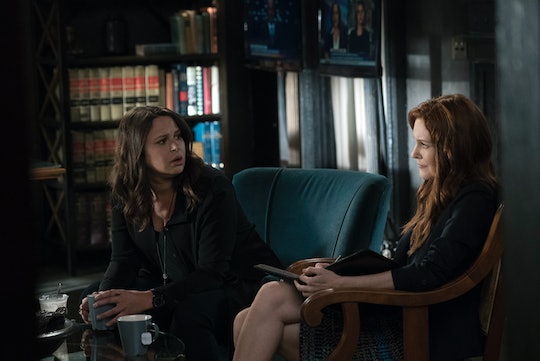 Quinn's Fate Came With A Twist On 'Scandal'

When Scandal ended the first half of its final season with a cliffhanger that alluded to Quinn's death, most fans were torn. Some believed that Rowan had really killed her in his house, while others (myself included) just refused to believe that she was gone. But after Thursday's episode, there are now questions about the baby she was pregnant with when she went missing. So, is Quinn's baby alive on Scandal? Rowan may or may not have killed Quinn, but either way, he's been hiding something huge.

During the time between the winter finale and Scandal's return Thursday night, fans were undoubtedly telling themselves that Quinn was surely alive because as evil as Rowan is, he couldn't kill an innocent baby. But I don't think any of us really considered that Quinn might have had her baby while being held prisoner by him in the basement. But even though the baby may be alive, she might not be.

At the end of the episode, aptly titled "Robin," which was the name Quinn and Charlie had chosen for their unborn daughter, Charlie showed up at Rowan's house. He wanted to come back into B613 fold, or at least something like it so he could turn off his emotions and be the trained killer he once was. But just as he was about to leave, he heard the cries of a baby and, like all of us watching, his heart basically almost leapt out of his chest.

Joe Morton (Rowan) tweeted throughout the episode and although his tweets were more like poetic commentary than spoiler-heavy, he did mention that the name of the episode wasn't meant to be about Quinn.

Until the end of the hour, the episode wasn't about the baby, but rather focused mainly on Quinn and what had happened to her. If Morton's tweet really is a clue, then that must mean the episode referred to the baby, so it's more than likely that the baby that was shown in the crib at Rowan's house really does belong to Quinn.

Of course, that opens up a whole other batch of questions, namely how Rowan delivered the baby? Did he have help? Is this how Quinn died, due to complications during childbirth? Maybe Rowan used it as an opportunity to gain control back over Olivia. Or did he really shoot her in cold blood? Is it possible he's still simply biding his time and keeping Quinn locked in the basement while her baby gets the princess treatment in what was clearly Olivia's childhood bedroom?

In the promo for the next episode, "Good People," it looks like things will be rewound a bit to finally give viewers some concrete answers as to what happened to Quinn and her baby in Rowan's basement on Scandal. While all of that screams her inevitable death as opposed to everything being a big old red herring so far, it's still possible that Rowan kept her alive to try and manipulate Olivia in some way in the future.

If he wanted to burn Quinn's body in a car, he could have simply done so and left the scene rather than calling it in to attract extra attention, which allowed Olivia to know about the charred body right away. There was also the antique hair clip that was traced back to the Smithsonian, where Rowan works.

So as much as there might be clues alluding to Quinn's death, there's still the possibility that she's alive. And it's even more likely that the baby in Rowan's house is hers.