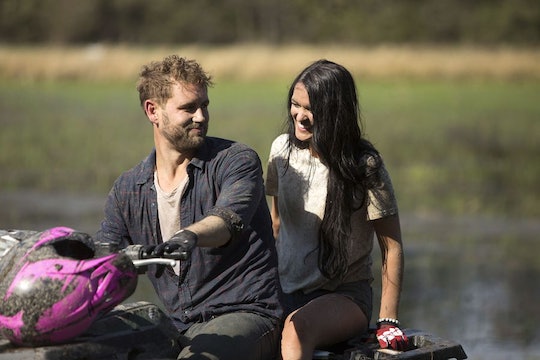 Raven Is Doing Well After 'The Bachelor'

Now that the end is near for Season 21 of The Bachelor and Nick has narrowed down the 30 contestants to just two women, it’s time to really think about what happens next. Because this isn't Sister Wives — Nick can only propose to one of these two very different women and it will either be Raven or Vanessa. But regardless of who Nick picks, fas are probably already wondering if Raven is single after The Bachelor.

Even though viewers now know she made it to the final two this season, it doesn’t mean that she ended up with the usual big old rock on her finger. And it also doesn’t mean that, if Nick did propose to her, the two are even still together anymore. While Raven was honestly never my first pick for who Nick would end up with when this is all said and done, she’s grown on me and I can see the real (and I fear the imminent overuse of this word) connection between the two of them.

Likewise, I can see past all of the Canada vs. living in the U.S. drama between Nick and Vanessa, so it’s anyone’s game at this point. But Raven’s Instagram might give away some clues about her relationship status after The Bachelor. And by relationship status, I mean possible lack thereof as well.

Among all of the Bachelor promotions and photos of Raven with all of the friends she made while on The Bachelor, her Instagram has a few more personal photos peppered in there, but none of them give away anything about a possible romance in her life. That’s to be expected, since the show hasn’t officially ended for the season and she really shouldn’t be giving anything away, but there was one photo that kind of made me think for a second.

Her adorable dog is staring up at her from a pile of leaves with some snow mixed in there. And we all know that Nick’s new home of Los Angeles isn't exactly the skiing capital of the world. If Raven ends up with Nick after The Bachelor, my guess is that she would have relocated to him and they would have started their life together on the West Coast. She did post a photo of herself in L.A. months ago with the caption “feels like home.” Judging by this particular photo though, she’s still home in Arkansas.

But even if Raven and Nick don’t end up together on The Bachelor, there’s no reason why she couldn’t find love outside of the show. That’s still a thing, I promise. Even so, her social media world gives no indication of any romance in her life other than the girlmances with all of the women from Season 21 of The Bachelor, which is almost better.