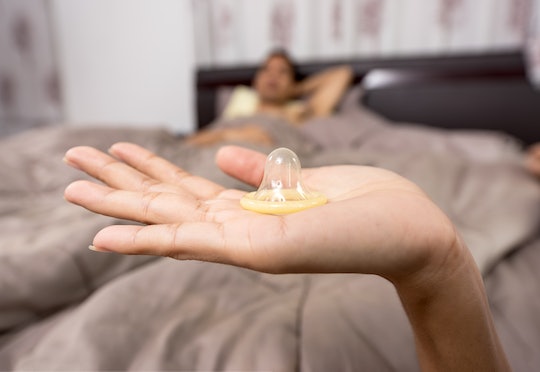 Is Removing A Condom Without Consent Legal?

The internet is currently buzzing about non-consensual condom removal during sex, an act that some are calling a dangerous "new sex trend" or "stealthing" — but which is more accurately described as a form of sexual assault. According to a new study published in the Columbia Journal of Gender and Law, it's a relatively common practice, but despite its prevalence, there has never been a court case for this form of assault. That begs the question: is removing a condom without consent legal?

Considering that some states' assault laws are rather archaic, and that there haven't been any sexual assault cases that dealt solely with condom removal in the United States, it's hard to say whether all courts would see non-consensual condom removal as sexual assault. Study author Alexandra Brodsky, a fellow at the National Women’s Law Center, couldn't find any existing cases in the United States that dealt with the issue. "Victims ... say they do not know what to call the harm and United States courts have not had occasion to address and name the practice," Brodsky wrote.

But consenting to sex with a condom is very different than consenting to sex without a condom, and the latter brings with it the risk of pregnancy and contracting sexually transmitted infections or diseases. "Stealthing" is not just a selfish and deceitful move — it's a form of sexual violence.

"Getting consent in a deceitful way is rape," Hilla Kerner, a spokesperson for the Canadian Association of Sexual Assault Centres, told the National Post in 2013. "Real consent, free consent can only be informed consent."

To be clear, a court in Switzerland already agreed with that definition in a landmark case earlier this year: a 47-year-old man was convicted of rape and sentenced to a year in prison after removing a condom during sex. His partner did not know until afterwards that he had removed it, and she had agreed to sex with a condom. Whether other courts in other countries come to the same conclusion of guilt for similar cases remains to be seen.

According to the Huffington Post, Brodsky believes a new statute is necessary in the United States in order to help victims of non-consensual condom removal pursue criminal charges and find the support they need. Many of the women Brodsky interviewed didn't have a name for the assault they'd faced, with one woman calling condom removal "rape-adjacent." Many women don't know that it's a common experience — or that it absolutely shouldn't be.

"The law isn’t the answer for everyone, and it can’t fix every problem every time," Brodsky told the Huffington Post. However, legally defining so-called "stealthing" as sexual violence would assure survivors that they weren't simply overreacting (as one Reddit user worried she was) or alone. Brodsky continued:

One of my goals with the article, and in proposing a new statute, is to provide a vocabulary and create ways for people to talk about what is a really common experience that just is too often dismissed as just ‘bad sex’ instead of ‘violence.’

Removing a condom without a partner's consent isn't "stealthing" or some dangerous new "sex trend" — it's sexual assault, and it shouldn't be treated as anything else.