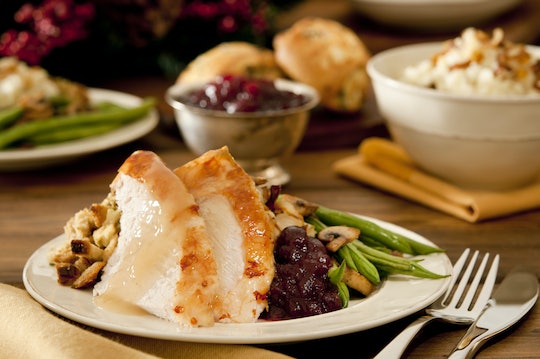 If you're pregnant, then you probably know there are several things that are off limits when it comes to your diet, including sushi, your beloved glass of wine, tuna, and, for some women, their morning cup of coffee. But with the holidays rolling around, I feel like it's definitely time to talk turkey, right? Like, can you stuff your face with stuffing and hoard all of the green bean casserole? Is roasted turkey safe for pregnant women? Because, if not, then I really don't see where the humanity is in all of this.

"In contrast to deli turkey, turkey roasted in your home is very safe to eat during pregnancy," Meghan A. May, associate professor of microbiology and infectious diseases at the University of New England College of Osteopathic Medicine, tells Romper in an email interview. "Contamination of food by listeria usually happens during production/processing, and so the biggest danger comes from food that goes straight from production to your plate without being cooked in between."

May explains that since people cook their turkeys prior to serving them up at Thanksgiving, you don't have to worry about listeria because it would be killed off in the cooking process if it was present. "On the other hand, we almost never cook deli turkey before we eat it, and so that killing doesn't have a chance to occur," she says.

According to the Centers for Disease Control and Prevention (CDC), pregnant women are 10 times more likely to get a listeria infection when compared to other non-pregnant healthy adults. The CDC also noted that listeria infection can cause miscarriages, stillbirths, and preterm labor.

The other thing to consider about listeria, May says, is the ability for it to grow at refrigeration temperatures. But even though this would seem like a potential problem for Thanksgiving turkey leftovers, it is still safe to eat them, she notes. "This is because listeria won't typically contaminate meat, cheese, produce, or anything else when it is prepared inside a household," May says. "Once it has been cooked inside a household, it is going to be safe."

Dr. Allison Hill, OB-GYN and co-author of The Mommy Docs’ Ultimate Guide to Pregnancy and Birth agrees, telling Romper in an email interview that listeria in both raw and cooked, refrigerated turkeys, “can be avoided by cooking all meat to 160 degrees or higher.”

As for the rest of the Thanksgiving day spread, May cautions that pregnant women should still be careful about eating raw cheeses, unpasteurized milk, or pre-sliced veggies and fruits that are typical to Thanksgiving dinner spreads. Other foods to always avoid in pregnancy include high mercury fish, like swordfish and shark, raw eggs, organ meats, raw sprouts, and undercooked fish.

According to the American Pregnancy Association (APA), "you don’t need to panic if you are pregnant and have been eating deli meats" because the likelihood of contracting listeria is slim. If you do plan to continue eating deli meats, then the APA recommended recooking the meats until they are steaming. That way any listeria that is present would killed off.

"The risk with these foods involves potential contamination with listeria before the packaging stage," Hill says. "If these foods are also reheated to 160 degrees Fahrenheit or more, they are perfectly safe."

That means that you can indulge in all of the turkey, mashed potatoes with gravy, cranberry sauce, and stuffing of your dreams on Turkey Day. As for your great aunt who will not stop saying, "You're huge!" well, unfortunately, I can't help you with that — although I do hear that grabbing yourself a plate of seconds helps.