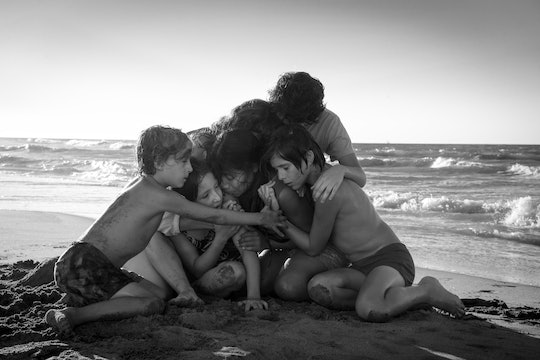 The Inspiration For 'Roma' Comes From Real Life Events

When director Alfonso Cuarón came up with the idea for his latest movie, it was a far cry from earlier projects of his like Harry Potter and the Prisoner of Azkaban and Children of Men. As writer, director, producer, and editor of the film, Roma is a personal creation of Cuarón's. So naturally viewers will be asking if Roma is based on a true story by the end credits. The short answer is — sort of. Cuarón drew from his real life experiences and memories to create this love letter to his childhood and former family nanny, Liboria "Libo" Rodríguez. It's also a lot more than an autobiographical movie.

Cuarón told Variety that he made the movie with the intention of paying homage to his childhood in the Roma neighborhood in Mexico City through the eyes of his nanny, who he’s still close with today.

"It was probably my own guilt about social dynamics, class dynamics, racial dynamics," he said of what drew him to make the movie from her perspective rather than his. "I was a white, middle-class, Mexican kid living in this bubble. I didn’t have an awareness." By telling the story through the nanny's eyes, he was able to see his privileged childhood for what it was and say something about it.

He explained that he talked to Rodríguez about her memories of his family and home growing up and she helped to piece it all together for him. Roma may have a few details that differ from what happened during his youth, but for the most part, it was inspired by his childhood and has some real life memories and events recreated for viewers.

From finding a house that was recreated to look like his childhood home to taking great care in casting the right actors for the most important roles, Cuarón made Roma his baby. And it was especially important to him that he cast the right actress as Rodríguez specifically.

"It was immediate," Cuarón said, of casting Yalitza Aparicio to play Cleo, the movie version of his childhood nanny. "I’m talking about Libo. I’ve known her all my life. I know her attributes. I know her approach. I know that smile. So it was one of those things when you meet someone and you say, 'Please, please, I hope she says yes.'"

In an interview with Vanity Fair, Cuarón explained the process he went through to recreate the scenes from his childhood with every detail possible. He said that the majority of the scenes are from his own memories, while others are from Rodríguez’s or his siblings’. To make the Roma house look as much like his family’s home as possible, he collected furniture from the original home from different family members and furnished 70 percent of the set house to make it as authentic as possible.

The rest of Cuarón’s family is depicted in Roma, but with most of the focus on the Cleo character, viewers will get to see a different point of view of his upper middle-class upbringing, a story that is clearly important for him to tell. Roma received a limited theatrical release in Mexico on Nov. 21, and is now streaming on Netflix.