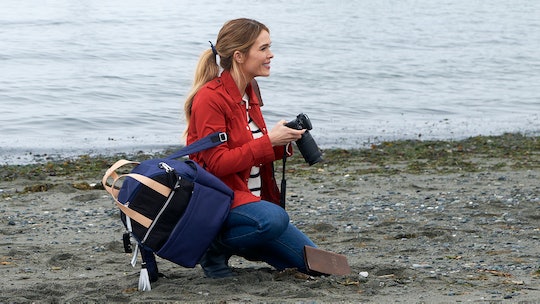 Oh, Ship — Is 'Sailing Into Love' Based On A True Story?

Life might be uncharted territory, but love will always lead the way. At least, that the story that Hallmark Channel's latest film, Sailing into Love, is trying to tell. The television movie, which premieres on Saturday, May 17, at 8 p.m. ET, stars Satisfaction's Leah Renee and When Calls the Heart's Chris McNally in a heartwarming romance that will certainly have you excited until the last drop. But is Sailing into Love based on a true story? Although fans love a good tale inspired by real-life events, Sailing into Love is a Hallmark Channel original.

Unfortunately, if you're only into movies based on true stories, Sailing into Love is not for you. As of right now, there is no indication that the new film is an adaptation of any kind. In a press release courtesy of Crown Media, the company that owns Hallmark Channel, Sailing into Love is based on a story by Richard C. Okie and Rosine Courtney Okie. The company also revealed that both writers helped write the teleplay, along with Marcy Holland. Then when the network released the trailer, the narrator called the film an "all-new original movie." So it's highly likely that Sailing into Love is simply a fictional story written for Hallmark Channel.

According to Hallmark Channel, Sailing into Love follows high school biology teacher, Claire Richards (Renee), as she returns to the small seaside town of Willow Bay. She's back in town as a bridesmaid in three weddings and she hopes to use the time to get back with her ex, Jason.

Meanwhile, Claire takes a group of her students to Blue Island as part of a summer class. She quickly learns that Blue Island might be sold to a resort developer, so she goes on a mission to save it. Along the way, Claire meets Tom Hastings (McNally), who is the new charter ship captain that takes Claire and her students back and forth between Willow Bay and Blue Island.

Eventually, Claire and Tom join forces to save the nearby island, and they fall helplessly in love. But Tom isn't the type to stay in one place for too long. Will their love set sail or will the pair have to adjust their sails to reach a new destination? You're going to have to sit back and see for yourself.

While Claire and Tom may not have been inspired by real people, the characters in Sailing into Love go through struggles that viewers can relate to, such as Claire's desire to save Blue Island. In a Facebook Live interview with Hallmark Channel, Renee gave a bit of advice for people who are fighting a good fight in the real world.

"Just start. A lot of the time, you can be discouraged and you think that maybe you can't make much of a difference, but I think that if you just start and go one step at a time, anything is possible," Renee said. The actress then explained that one of the key things Claire did the film was rallying the community around her and reminding them why Blue Island mattered in the first place.

Sorry, Sailing into Love wasn't based on true events. But even so, this is Hallmark Channel. Chances are, you'll find relatable moments sprinkled throughout the film. And if not, at least you know it'll make your heart go "boom boom." So tune in and fall in love. Sailing into Love premieres May 17.