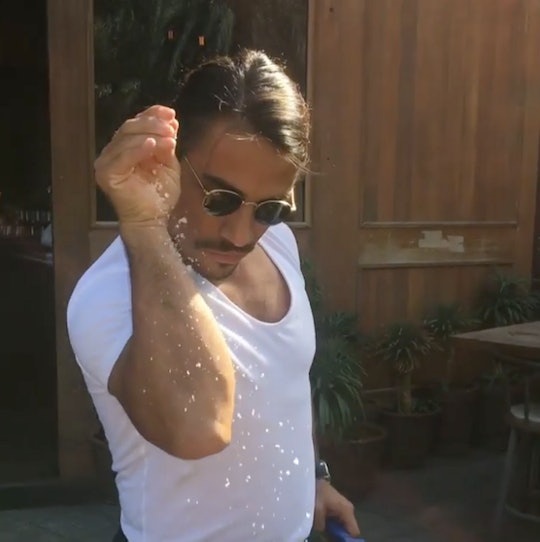 Remember when being a vegan was basically the coolest kind of eater you could be (well, macrobiotics notwithstanding, of course)? Going to parties meant enthusing over faux cheese made with Macadamia nuts, chickpeas, chickpeas, and chickpeas, and 17 step recipes to make "spaghetti and meatballs" that contained neither spaghetti nor meat (seriously, that's talent). Luckily for you omnivores out there, the tides are a turning. Because now we have a new internet darling cooking up gorgeous meat for us to salivate over. And if you're wondering if Salt Bae is a real chef, wonder no more. This Turkish delight is the real deal.

"Salt Bae" is actually Turkish chef Nusret Gökçe, and he has been making the internet lose its mind by simply salting a steak. Yes, he's pretty theatrical about it and yes, that steak looks like all kinds of amazing. But he seems to have tapped into something elemental in all of us. Something carnal and hungry and primitive.

Nusret Gökçe first set the internet on fire on Jan. 7, when a video of him salting a gorgeous piece of ottoman steak was shared all over the internet. Because honestly, I thought we were all supposed to be ashamed of using salt. And then comes Salt Bae, making salt look so... right?

Salt Bae has been having his way with meat for 17 years; He first became a butcher's apprentice just outside of Istanbul when he was only 16 years old. The 33-year-old went on to quit his job in 2009 to travel the world. He visited Argentina, Japan, and New York. He then returned, armed with a broader learning (and perhaps a more refined palate) to open up the first of his restaurants in 2010 in Turkey, a steakhouse named Nusr-Et (which quite literally means "meat").

So how famous is this steak wizard? Well, Ben Affleck is wearing a t-shirt with Salt Bae on the chest these days, so... yeah, that famous.

If you are finding yourself a little flustered by your sudden craving for meat (when you swore to everyone who would listen you were an animal-loving vegan who was utterly satisfied by the legume family), have no fear. I think there's something in the air. A weird mix of a crazy year that has us all on edge, a need for the comfort foods of old... and a naughty, talented little number like Salt Bae whipping us into a frenzy with his skilled hands and cheekbones that just won't quit.

It's probably a passing fancy. But pass the salt anyway, just in case.