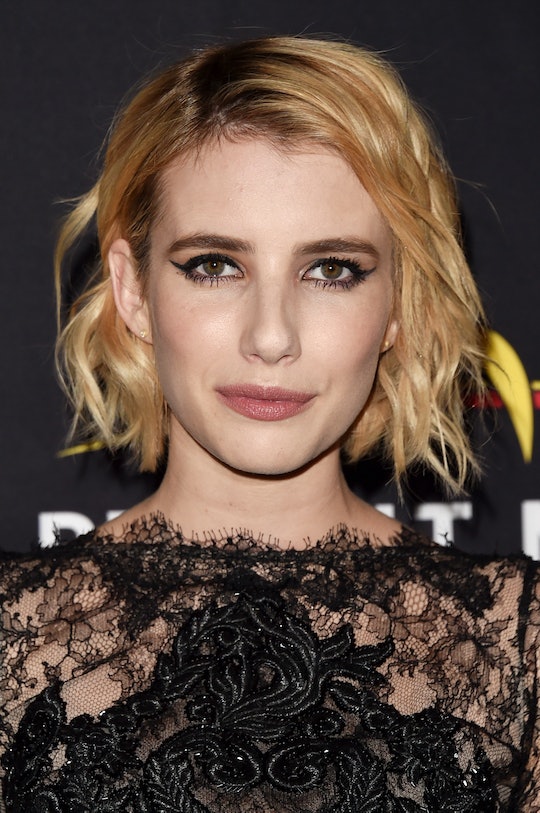 Emma Robert's 'AHS: Cult' Role Is To Die For

After skipping out on American Horror Story: Hotel, Emma Roberts made her return to the series in the fourth episode of Season 7. She played a young reporter named Serena Belinda who came into direct conflict with Adina Porter's Beverly Hope — and paid the price for it. But is Serena Belinda from AHS: Cult based on a real person? If she is, she's not anyone I'd want to run into; Serena isn't exactly the kind of character you end up rooting for.

In "11/9," Serena primarily functioned as an antagonist for Beverly. She represented everything Beverly resented about her job and the treatment she received at work. Beverly had to work for every little scrap and didn't receive much in the way of rewards, whereas Serena got cushy assignments and special treatment, in part because her method of getting ahead involved flirting with the boss. But Serena was also a young white woman who had no qualms about using her privilege to get ahead even if she didn't deserve the kind of career she was after. There were many factors that led to Beverly's rage at work, but Serena seemed to be the symbol of all those things combined into one.

There's no evidence that Serena was based on a real person, which makes sense because she seems to have been constructed entirely for the story. She's there to serve Beverly's larger arc and not much else, which is why Serena says goodbye in the same episode she's introduced.

Serena was doing one of her signature puff pieces when three very familiar clowns suddenly descended and stabbed her and her cameraman to death. That was just more evidence that she wasn't based on a real person, because if a reporter had been stabbed on the job by a group of people (clowns or not), it would definitely have made the news even if the tape itself never aired. Serena fit too neatly into the plot for her to be anything but fiction — even if her more unappealing characteristics could seem a little too realistic.

Even Serena's death was there to serve the plot. Her clownish killers were revealed to be none other than Kai, Harrison, and Meadow, who had undertaken the murder to add Beverly to their growing cult. Kai wanted to prove to Beverly that he was there to look out for her, to get her the things she wanted and level the playing field so she could succeed, even if the cost of doing so was insanely high. He made a drastic move to prove himself to her and Serena was sacrificed in the process.

Serena may not have been based on a real person, but she was certainly reminiscent of other characters Roberts has played in Ryan Murphy productions. The only thing separating Serena from Scream Queens' Chanel Oberlin and AHS: Coven's Madison Montgomery was brown hair instead of blonde (though even Madison was more sympathetic than Serena). It's a character Roberts has had some practice playing, so it was no surprise she did it well.

In an appearance on Late Night with Seth Meyers, Roberts described Serena as "not the nicest person," which was a polite way to put it. Serena only cared about herself and what she wanted without paying a thought to the consequences of her actions. That kind of vapid, self-absorbed brat is an archetype Roberts has returned to more than once in Murphy's shows.

Serena came and went in just one episode, but she served a purpose in the narrative in her brief appearance. She supplied Kai with just the right target to get Beverly on his side and gain a supportive voice for himself in the media. Serena may not have meant to, but she set things in motion for the rest of the season.