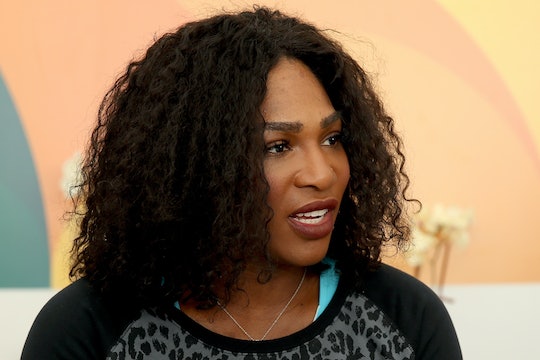 Is Serena Williams In 'Lemonade'? The Show Just Got More Epic

Little was known, for sure, before Beyoncé's highly anticipated Lemonade dropped Saturday night on HBO. Questions surrounding what exactly her newest project was, or what it meant, continued far after the first song played and the first image was displayed. Her emotional songs and intoxicating images had viewers wondering if Beyoncé was announcing her divorce, wondering if her husband has been cheating, and wondering, "Is Serena Williams in Lemonade?"

At least two of those questions are pure speculation at this point. (Romper reached out to Jay Z's representatives for comment regarding questions on social media about an alleged infidelity. We have not yet heard back.) But the answer is a resounding "yes" to one of those questions, as the tennis superstar Serena Williams made a gorgeous cameo appearance, throwing her middle fingers up and waving bye to the bad boys and side chicks. There's little about Lemonade I believe the entire world can handle right now, but Serena making an appearance just adds to the unbelievable moment we're all lucky enough to sit back and witness. Angry Beyoncé is everything, and it turns out, so is angry Serena, and watching two powerful women make zero apologies about being themselves, twerking in high heels, or telling (potentially) the love of their life to kick rocks, is the break-up anthem we didn't know we needed, and definitely didn't deserve.

Serena and Beyonce are no strangers. In fact, Serena parodied Queen B's "7/11" in a hilarious, tennis-friendly video not too long ago. Perhaps it was Williams' video that caught Beyoncé's attention and made it painfully obvious that the world would be incomplete without a Beyoncé-Serena video. Or, maybe, it's just the universe knowing that after a sad start to 2016, in which some of the greatest artists of all time have been called to their out-of-this-world homes, we needed this. We so needed this.

Either way, and regardless of what Lemonade is about — an impending divorce, infidelity, racial injustice, gender equality, menstruation even, we may never know for sure — Serena showing up made the entire experienced that much more memorable, as Beyonce has clearly re-defined what it means to break up, and re-defined what it means to have an HBO special. Now, whenever anyone feels hurt or cheated or lied to, they'll think back and see images of Serena and Beyoncé, walking through a beautiful house in black and white, throwing their middle fingers in the air and promising the world that all they need is their girls, and themselves.

If that can't get you through a horrible break-up or a painful divorce, I don't know what will.