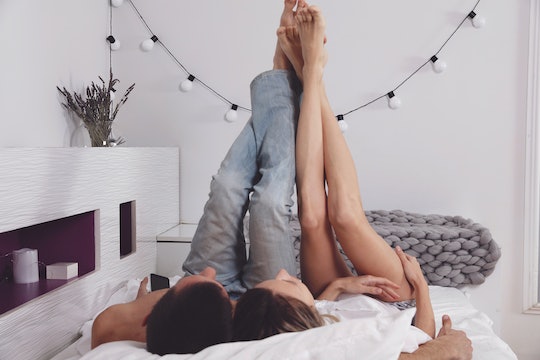 Here's How TTC Sex Is Different Than Your Normal Intimacy

When you’re trying to conceive (TTC), there seems to be a lot of tips and tricks floating around out there. There’s also a lot to consider, as far as tracking, and keeping up with your health (and your partner’s health). Is conceiving a baby as easy as just simply having sex when you want to? Is sex different when you're trying to get pregnant? What may seem like a silly question has been searched online quite a bit, time and time again, by curious and probably frustrated ladies who are TTC. I asked an expert his thoughts on whether or not there is a difference between regular sex, and TTC sex, and it looks like we can all take a deep breath and relax.

The only difference between TTC sex, and regular "just-for-fun sex," is the timing and frequency in which you have intercourse, according to Dr. Jamil Abdur-Rahman, who is an OB-GYN and medical travel blogger along with his twin brother for TwinDoctorsTV. As far as timing goes, Abdur-Rahman says, “I always tell my patients who are trying to conceive to do home ovulation urine tests and daily temperatures. I advise them not to have sex until their temperature has spiked and their urine ovulation test is positive (two signs that they've ovulated). After all, you don't want to compromise the male partner’s sperm volume.” For frequency recommendations, after ovulation, Abdur-Rahman recommends having sex every other day for the next week, since if you do it every single day, you could compromise your partner’s sperm by overdoing it.

Then once you release your egg, it will live for 12 to 24 hours after leaving your ovary, noted the American Pregnancy Association (APA). That’s why it’s helpful to have sex every other day so you have a higher chance of making the connection between the egg and your partner’s sperm. And if you don’t have an ovulation tracker or basal body temperature thermometer at home, the APA explained that ovulation can be calculated by starting with the first day of your last period, or by calculating 12 to 16 days from your next expected period. Additionally, “Most women ovulate anywhere between Day 11 and Day 21 of their cycle, counting from the first day of the [last menstrual period]," the APA noted on its website. As this is your fertile period, it’s time to get it on every other day. But is there anything different you should be doing while you’re having all that unprotected sex?

There's a common theory running rampant on TTC message boards, forums, and Facebook groups about positions and elevating your hips during or after intercourse, but does that help with conception? Abdur-Rahman says, “There are no sexual positions that have been scientifically proven to increase a woman's chances of conceiving." He adds that you don’t even need to elevate your hips after intercourse to help the sperm get to where they need to go. What does help, however, is if the woman also has an orgasm. (Darn.) Abdur-Rahman explains, “The reason is this ... When women have orgasms, the uterus and the cervix ‘spasm.’ These rhythmic contractions or spasms can cause the cervix to ‘swing’ back and forth, bringing it in contact with a portion of the vagina called the posterior fornix. Sperm tends to sit in the posterior fornix of the vagina once a man has ejaculated. So, while positioning after intercourse doesn't improve a woman's chance of conceiving, a woman — and more importantly her partner — working hard to ensure that she has an orgasm during intercourse can.”

So as long as you’re timing it within the fertile week, you can have sex any old (or new and fun) way you want to. You don’t have to do it in different positions, you don’t have to lift your hips or prop your legs up on the headboard after you’re finished. Thankfully, the best thing you can do is have an orgasm to get those sperm to where they need to go. Good luck and have fun.

More Like This
The Best Couch Sex Positions
How To Tell If Someone Is Lying To You: 34 Signs To Watch For
6 Sex Positions To Reduce Leg Pain
Queen Elizabeth II's Most Romantic Quotes About Prince Philip