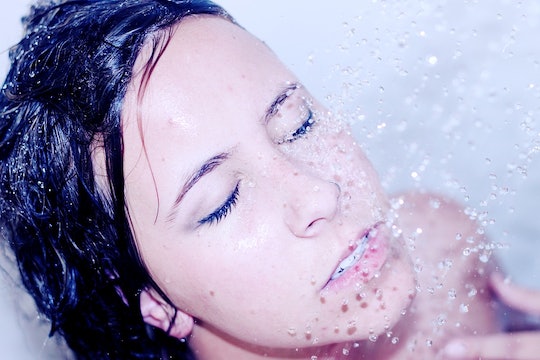 How To Have Safe Shower Sex When You're Pregnant

When it comes to sex during pregnancy, you can still enjoy yourself and even take advantage of new position. You may even be tempted to take your sexy time to somewhere outside the bedroom, like the shower. (This may be an especially good option if you are a victim of pregnancy sweats.) But is shower sex safe when pregnant though? The reviews are mixed, but as long as you're taking safety precautions in areas that may, literally, cause you to slip up, it's definitely doable.

According to Popsugar, shower sex for women isn't recommended for any woman — pregnant or not — for two main reasons. The first being that it can take away from the body's natural wetness and make lubrication feel as if it's lacking during sex, which can be uncomfortable. The second reason is based on the idea that the wetness could cause friction-filled sex (from lack of lubrication) that may cause a condom to tear. Luckily, if you're already pregnant and you and your partner have been tested for STDs, that's not an issue you need to be concerned with.

Although sex in the shower may cause some lubrication issues, it doesn't make shower sex while pregnant unsafe. It's the issue of balance and the potential slipping hazards that make shower pregnancy sex a little more dangerous. A good way to tackle this safety hazard is to deck out your shower with sturdy handles and non-slip mats to make falls less likely. Test out the sturdiness of your handles before you're making full use of them, and as long as you feel secure and comfortable, shower sex is still something you can enjoy during pregnancy.

You also need to consider which shower sex positions are safe while pregnant. According to Cosmopolitan, hands against the wall is a sturdy shower sex position that can help you brace yourself and stay put. Depending on how far along you are though, that may not always be the most comfortable option. One of the best positions to ensure you avoid the chance of a fall is to have your partner sit down in the tub or on a shower chair while you get on top.

In general, shower sex can be done safely while pregnant. You'll want to make sure your shower is prepped with a non-slip mat and potentially handles to sturdy yourself. Additionally, you should take advantage of the safest sex positions while in the shower. The most important thing, however, is that you feel comfortable and safe in any sex adventures you embark upon — pregnant or not.