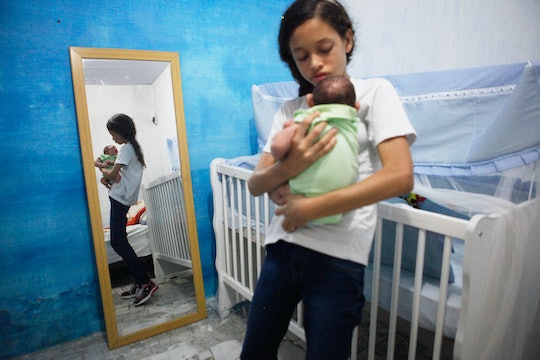 Is SIDS More Common In The US Than Other Countries?

Every parent out there probably worries about the specter of Sudden Infant Death Syndrome (SIDS) or Sudden Unexplained Infant Death Syndrome (SUIDS). The thought of losing a baby... it's unbearable. And it's still happening all over the world. While the infant mortality rate might be dropping, SIDS remains more common in the United States that many other countries in the developed world.

SIDS and SUIDS are defined by the Centers for Disease Control and Prevention as:

The sudden death of an infant less than 1 year of age that cannot be explained after a thorough investigation is conducted, including a complete autopsy, examination of the death scene, and a review of the clinical history.

These types of tragic deaths of babies under 1 year old are often unexplained, or can frequently be caused by accidental strangulation or suffocation as the result of sleep habits. As the federal government has developed several initiatives to combat SIDS, the U.S. was still below 25 other countries in infant mortality rates as of 2010, according to a U.S. study reported by CBS News. That study compared U.S. infant mortality rates with those in Europe as well as Australia, Israel, Japan, Korea and New Zealand, and the results were troubling. The report found that U.S. infant mortality rates, which were 6.1 per 1,000 live births at the time, were double the rates of Finland, Japan, Portugal, Sweden, the Czech Republic, and Norway.

The study's lead author, CDC senior statistician Marian MacDorman, pointed to several reasons for the higher infant mortality rates in the U.S., including a higher proportion of premature births. She told CBS News:

I think we've known for a long time that the U.S. has a higher preterm birth rate, but this higher infant mortality rate for full-term, big babies who should have really good survival prospects is not what we expected.

A lack of access to prenatal and postpartum care in certain communities were also factors considered for the higher infant mortality rate, according to pediatrician Dr. Deborah Campbell, director of neonatology at Children's Hospital at Montefiore Medical Center in New York City. Campbell noted, according to CBS News:

The U.S. lags behind other developed countries because there remain significant gaps in access to and utilization of prenatal and preconception care. There is a well-delineated history of racial and ethnic disparities in maternal and infant outcomes in the U.S., with black women and their infants being at greatest risk and having the highest rates of poor outcomes.

Safe sleep guidelines laid out by the American Association of Pediatrics, have contributed to a decrease in the infant mortality rates since 2005. The AAP recommends that babies sleep on their backs, alone in a crib without extraneous blankets and soft toys to reduce the risk of accidental suffocation. But, aside from safe sleep practices, which are only half the battle in lowering infant mortality and SIDS rates, not every community has access to prenatal services and education. Hopefully movements for better, more universal healthcare and state programs for baby boxes will help provide better care to new mothers.