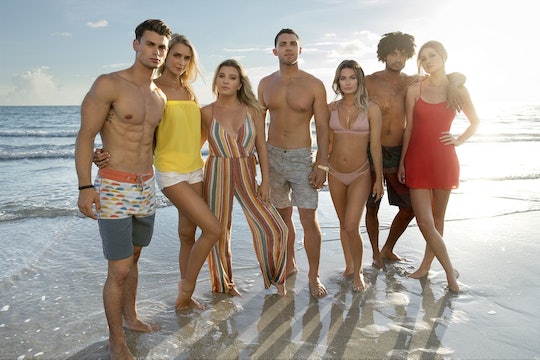 'Siesta Key' Season 2 Is Just As Dramatic As The First

If you’ve watched any of the reality TV shows on MTV lately, then chances are, you’ve seen one of the many promos for the upcoming season of Siesta Key. Unlike The Real World or Ex on The Beach, however, it doesn't have the same format of a new cast every season and it’s even shot differently. This has led some viewers to wonder if Siesta Key is scripted. It definitely feels reminiscent of the similarly filmed reality shows from the early 2000s Laguna Beach and The Hills. But like its predecessors, Siesta Key is a non-scripted reality series that follows the same group of friends (more or less) every season.

There is a chance that Siesta Key is embellished for the viewers’ benefit, though. It's no big secret that the casts from The Hills and Laguna Beach are rumored to have reenacted certain scenes for a more dramatic effect or to be able to get said scenes on camera. The same might be said for Siesta Key, especially since it’s so similar to the style and format of Laguna Beach.

Laguna Beach creators Mark Ford and Kevin Lopez were actually brought on the show after one of the cast members, Alex’s, dad, initially hired a company to film the pilot starring Alex and all of his friends. I guess that’s one way to get MTV to notice you. So at the very least, Siesta Key Season 1 may be as authentic as you’re going to get with an MTV reality series like this.

Ford told Reality Blurred that although Siesta Key certainly feels reminiscent of the show that came before it, the cast has helped to make it more authentic without the need for much producer intervention. "I think number one you just have a great cast," he said. "They do most of the work. There were so many things that happened that we never could have anticipated. This cast this cast is inherently interesting and dramatic. If the cameras weren’t there, they would be doing the exact same thing that they’re doing on camera. I think the cameras only amplify."

Since The Hills ended its six season run on MTV in 2010, the network has been lacking a similar show and Siesta Key helped fill that void. It’s not another competition reality show like so many others on MTV and it’s not exactly a docuseries. Instead, viewers can invest their time in the same cast of friends every season and watch the drama unfold without worrying about someone being voted off at the end of a weekly episode. Although I’m sure there are a few Siesta Key cast members that not every fan would love to see every week.

As similar to The Hills and Laguna Beach as it might be, Siesta Key still differs from the original MTV shows. Instead of focusing on a group of high schoolers, as Laguna Beach initially did, Siesta Key is about a group of friends who are about to embark on adulthood after finishing up college. They also live in Florida rather than California, so different coasts obviously means different drama, right? Just kidding, There’s still the awesomely bad relationship and friendship woes between this group of friends and frenemies.

Some might claim that Siesta Key is scripted or, at least, embellished in some way, and that could be true. Right now it seems like it draws from real life events in the lives of Alex and his friends and if that means recreating a scene here or there for the audience’s benefit, then it's a small price to pay for all of the drama. There’s been no big reveal that Siesta Key is scripted, so for now, I’d give them the benefit of the doubt.