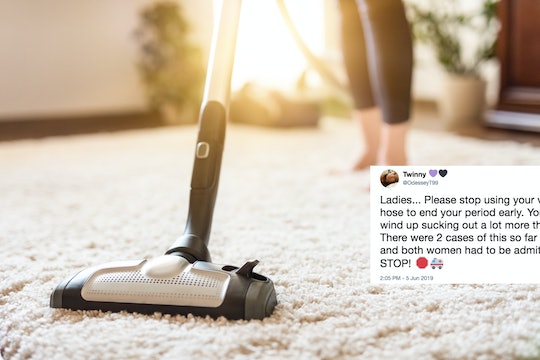 Apparently Women Are Using Vacuums To Speed Up Their Period & Hoo Boy, It's Not Good

I'm not sure I know a single person who wants to talk about menstruation outside of a doctor's office. But the undeniable truth is that when it comes to your health, it is necessary to be open and honest about why in the world a woman would want to use a vacuum cleaner anywhere near her vagina. Yes, that really did happen. Twice. In one week. The Twitter-verse had plenty to say about the event, which was tweeted by a nurse to raise awareness about bad internet advice surrounding how to speed up your period flow.

Yes, this is shocking. Yes, it sounds like clickbait. (But I can assure you it is not.) And yes, we have to start talking about the why behind women wanting to get rid of their periods as soon as possible.

The stigma surrounding a woman's monthly cycle is something that society has engrained into women's brains from a young age. I remember being embarrassed to ask my mom to buy me tampons before a school field trip to a water park at age 14. I had never used them before and for whatever reason, my teenage brain felt uncomfortable talking to my own mother about this basic need. I ended up borrowing some from a friend and having her hastily explain how to insert them, which was a little less embarrassing to me at the time (although messy), but the main thing that I remember is the flushed face and trepidation over even needing to ask for tampons to begin with.

Now, more than a decade and a half after that awkward encounter, periods are still something my friends and I discuss in hushed tones, especially if our husbands or kids are within ear shot. Why? I honestly have no idea, but it needs to change. If women are shamed into believing that this completely normal bodily function is something that needs to be hidden away from the rest of the world and never discussed, they might decide to take drastic measures to stop it ⁠— hence, why you are reading a story about the dangers of using a vacuum cleaner to suck away your period blood.

Reactions to the viral tweet included responses like, "Huh???" and "WTH" as people expressed their disbelief over why women would try with such desperation to end their cycle. And the forthcoming string of memes in the comments were as colorful as you might expect.

But now that the issue has been raised, it is imperative to spread the word about the dangers of trying any sort of home remedy you read on the internet to try and stop or speed up menstruation. Romper spoke with Dr. Michael Cackovic, an OB-GYN with Ohio State University Wexner Medical Center, to get his take on exactly what could happen if you try to use a vacuum cleaner to speed up your period's flow. "This is one of the craziest things I think I've heard of," Dr. Cackovic tells me. "It's pretty dangerous anytime you put anything [foreign] in the vagina or cervix."

Dr. Cackovic says that this type of misinformation about how to stop a period is reminiscent of the pre-Roe vs. Wade era when women would go to extreme lengths to perform dangerous, illegal abortions, noting that "the number of women that had complications from illegal abortions was as high as 18 to 20 percent and there were a lot of women who were damaged from that, and to me this is the exact same thing. Putting a foreign device up there that actually has a lot of risk anatomically, and theoretically, you could do damage that could affect your future fertility."

"Obviously introducing infection is another thing you could introduce by using a vacuum, so that's the first thing my concern would be. But the second thing is that physiologically, you're not making your period go away," he says, explaining that the uterus shedding and cramping to release the shed uterine lining is the process by which a woman's body expels blood during their period, as well as after giving birth. "So if you were to try to take it out really quick, you're going to be leaving a potential space there that's going to bleed more. It doesn't really work to me that you're sucking blood out, but basically the mechanism of menstruation is not being changed."

If you're desperate to stop your flow for whatever reason (been there, done that ⁠— got my period in the middle of a tropical honeymoon) Dr. Cackovic says there are ways to safely lessen bleeding your period that don't include using household appliances. "Hormonal birth control is the number one thing to decrease blood loss during menses, but the second thing that women can do that there's actually been studies on is taking NSAIDs (nonsteroidal anti-inflammatory drugs) like Motrin, Aleve, or Advil, starting 24 hours prior to getting your period and take it while you have your period to decrease blood loss. Obviously there is another pain control affect too, and it still requires medication, but it's the most common thing you can do at home to decrease blood loss as well as control the symptoms."

Dr. Cackovic wants women to know that there are a variety of reasons that you could be bleeding heavily, which could lead to the desire to try to stop your period's flow. "Maybe they're bleeding heavily because they have something organically wrong with their uterus like Adenomyosis. So in that situation if they feel uncomfortable with the amount of blood loss with their period, they should be seen by their OB-GYN to assess for things like fibroids, polyps, and Adenomyosis. All of those things which could be made worse if you're using a vacuum or something else to remove blood from your vagina," he says.

The internet is a wonderful tool, but proceed with caution when researching DIY medical advice. Always consult your doctor, even when your request seems ridiculous. They've heard it all, seen it all, and literally want the best for their patients ⁠— and they want you to keep the Hoover away from your vagina.