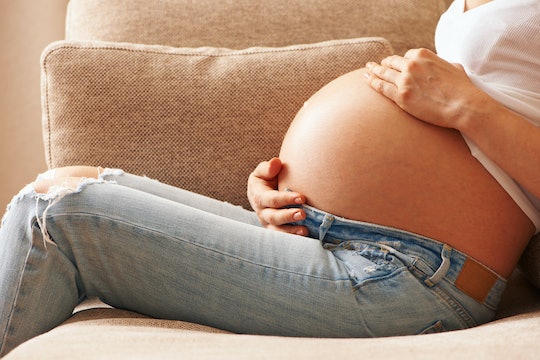 Here's Why Sperm Is Beneficial During Pregnancy

Moms will do a lot of things when they're pregnant to ensure that they're giving their baby the best chance possible. Goodbye beer, goodbye raw sushi, and hello... sex? OK, sex may have its own benefits when you aren't pregnant, but the nausea and heartburn don't exactly help your sex drive. But is sperm during pregnancy beneficial? It may sound like something your partner says to entice you away from the Netflix remote, but it turns out, there's some truth to the idea.

One thing doctors want you to do while you're pregnant is to relax and remain stress-free (which is hilarious considering you've just found out you're going to be a parent), but there's a good reason for it. According to a 2015 study in the journal Endocrinology, stress can affect the microbes in your vagina, which can then affect your baby's brain and gut development when they are born, and not exactly in a good way. The study noted that this change in microbiota is correlated with an increased risk of disorders like autism and schizophrenia.

So one way to keep that stress at bay? Sex. In an interview with Parents, pediatrician Dr. Ari Brown said that orgasms deliver an adrenaline rush, which can bring a great stress release. And when you're pregnant? Those orgasms can be even better than your pre-pregnancy romps.

But you can have plenty of orgasms without sperm. (Do you hear that? Plenty.) So is sex itself beneficial during pregnancy or does sperm have its own super powers?

According to a 2000 study in the Journal of Reproductive Immunology, swallowing semen may save you from a potentially dangerous condition in pregnancy: preeclampsia. The study concluded that preeclampsia often happens to women whose "immunological tolerance might be hampered," meaning their body has something like an allergic reaction to the fetus. But with semen, a mom is introduced to her partner's DNA, which means she's also introduced to her baby's DNA if the partner is also the baby's father, and her body can build up a "tolerance" to the baby, lowering her risk of preeclampsia.

Obviously, this doesn't mean you should be having sex every day or ensuring that semen is part of your daily diet, but it's nice to know that the activity that got you to this point (pregnancy, that is), can also potentially keep you and your baby safe. It's also important to remember that there are other factors that can influence your risk of preeclampsia, so speak to your healthcare provider for more tips on preventing it. Sperm can help, but it's not your only defense against the condition.