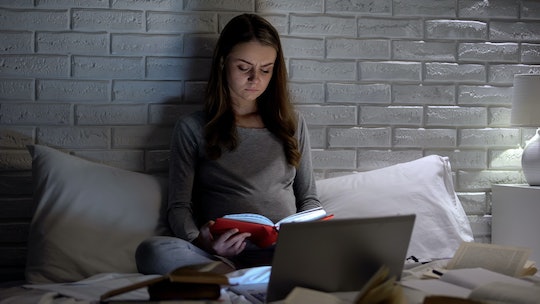 When your countdown to baby is a matter of weeks or days rather than months, and you have the name, nursery, and hospital bag all in order, the last thing you want is to experience any kind of worrisome symptom. Noticing spotting in the last trimester of pregnancy can be enough to make the most chill mom-to-be freak out. However, knowing the possible causes and what to look for can help you become more aware and knowledgeable if you happen to see blood spots during the final weeks before birth.

"Keep in mind, the third trimester spans the weeks 28 to 40-plus," points out Monica McHenry Svets, MD, an OB/GYN at the Cleveland Clinic in Ohio. "Bleeding in the early third trimester is (and should be) uncommon, and the patient's obstetrician should be made aware of any and all vaginal bleeding."

On the other hand, Dr. Svets tells Romper, vaginal bleeding late in the third trimester can actually be quite common. "The amount of bleeding at this time characterizes whether it is normal or abnormal," he explains. Seeing a trace of pink or red on the toilet paper after using the bathroom, or a pinkish discharge on your underwear, is "less concerning" than experiencing an actual flow of blood. "The more bleeding a patient has, generally speaking, the greater the pathology," says Dr. Svets.

Some of the more benign causes of third-trimester bleeding include an infection such as a yeast infection, vaginitis, or bacterial vaginosis. Intercourse can cause light bleeding, as can rigorous activity or trauma. The treatment depends on the cause. An infection can be treated with medication; trauma-related bleeding may need to be monitored to make sure the injury won't bring on preterm labor. If the bleeding follows sex, the mother may be advised to abstain from intercourse until the spotting has stopped.

Heavy or prolonged bleeding may be a sign of a more serious condition. Placenta previa occurs when the placenta, which normally attaches to the top or sides of the uterus, attaches itself in such a way that it blocks all or part of the cervix, according to the Mayo Clinic. Depending on the position of the placenta and the amount of bleeding, a mom-to-be might only need regular monitoring and to avoid strenuous activity for the duration.

But for more severe cases of bleeding, "she will likely be admitted to the hospital for several days of observation and fetal testing," says Dr. Svets. "If the bleeding is heavy and potentially life-threatening for the patient or baby, we make decisions to move toward delivery." Heavy bleeding can also indicate a placental abruption, when the placenta tears away from the uterine wall. Again, depending on the severity of the abruption, this requires either close monitoring or an immediate birth through induction or a c-section.

Another possible cause of heavier bleeding in the third trimester is preterm labor, when the cervix begins to open before the 37th week of pregnancy. Dr. Svets explains that if preterm labor is suspected, the mom-to-be will be admitted to the hospital for observation and treatment. Doctors typically administer steroids to help the baby's lungs mature and protect it from intracranial bleeding. The mom may also receive magnesium sulfate to stop contractions.

"Later in the third trimester — say, after 34 weeks — we might not try to stop a patient's labor," says Dr. Svets. "Doing so may cause more harm than good, and babies at this stage do very well on the 'outside.'"

Whatever the cause, it's important to report any amount of bleeding — slight spotting or a steadier flow — to your doctor regardless of your stage of pregnancy. Even if it turns out to be no cause for worry (as it most likely will be), it's always better to be on the safe side when you're expecting.