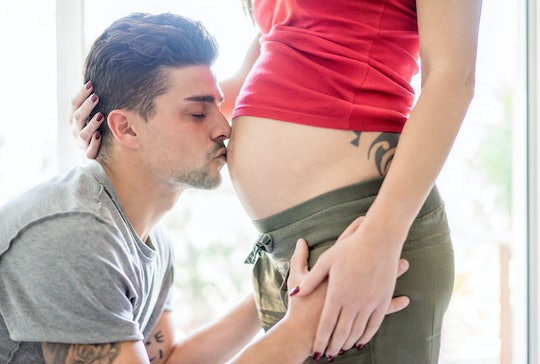 The Surprising Position That May Be Most Comfortable During Pregnancy Sex

In general, standing sex is perfectly safe when pregnant, and may be one of the most comfortable positions, according to Baby Centre. This is generally because women have more control over the depth of penetration while standing. Additionally, pregnant women are better able to control the pressure on their stomach. Although being pushed up against a wall may not be suggested, especially if you're further along, standing with your arms out against the wall or kneeling over a bed are great options.

Although standing sex is safe during pregnancy, you have to decide if it's the right way to go for you. For some women, standing sex may be uncomfortable or more exhausting. As Clinical Professor of Obstetrics and Gynecology Dr. Hilda Hutcherson told The Bump, sometimes pregnant women who stand for a long period of time can experience back pain, discomfort, or swelling, especially in the third trimester. So if you begin to notice that standing sex is causing aches or pains, it may be a safer option to make use of some more comfortable pregnancy sex positions instead.

Overall, standing sex should be perfectly fine to do throughout your pregnancy. As long as you're comfortable and are taking advantage of positions that don't hurt you or your belly, almost any position is acceptable. If you do still find yourself worrying or think something is abnormal, it's always a good idea to reach out to your doctor for advice.