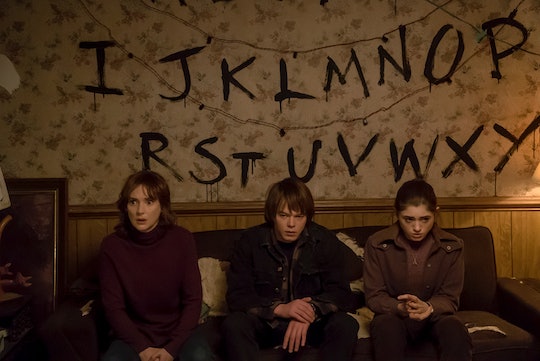 Is 'Stranger Things' Based On A True Story? You Won't Believe Some Conspiracies

The new Netflix series, Stranger Things, premieres until July 15, and it's already garnering enough attention to make you expect an immediate renewal for another season next year. The trailers alone make you think of your favorite '80s movies that involved kids coming of age and getting into all sorts of adventures. But, it also makes you wonder, is Stranger Things based off a true story? The way the previews play out, with a missing boy in a small Indiana town, make it seem like something ripped straight out of the headlines from years' past. But then it takes a supernatural turn.

The supernatural elements and alien-esque parts in the show make it clear that Stranger Things must just be an awesome an intricate story, reminiscent of Steven Spielberg and any masterpiece of his kind. Still, it's hard to ignore a few clues that lend to the idea that Stranger Things was at least inspired by events that are alleged to have taken place at a military base in Montauk, Long Island in the '80s. For one, the show is said to have originally been titled Montauk, but later changed to its current title, and the conspiracy surrounding the Montauk Project coincides well with what seems to be the supernatural elements of Stranger Things.

The theories about the Montauk Air Force Station/Camp Hero experiments revolve around the idea that human subjects were used to test out possible techniques of psychological warfare, including the possibility of time travel and mind control. In the trailer for Stranger Things, we see that the young girl who appears to have escaped from somewhere important also has telekinetic abilities. So, is Stranger Things based off a true story? At the very least, it seems to have some similarities to the rumors and conspiracies from Montauk.

If it isn't enough that '80s love child Winona Ryder heads the show as the missing boy's mother, we've got a group of adolescents who are out to figure out where their friend is and come across a strange girl with abilities they likely only read about in comic books. Think Stand By Me crossed with Super 8. Or something like that. Creators Matt and Ross Duffer, also known as the Duffer Brothers (of course) are no strangers to the horror genre, as they've previously worked on horror drama short We All Fall Down and 2015 horror thriller Hidden.

Whether or not Stranger Things is based on a true story with supernatural tones, Winona Ryder is a die-hard supporter of the Polly Klaas Foundation, which was formed when a young girl went missing from Ryder's hometown of Petaluma, CA. Winona Ryder offered a $200,000 reward for important information regarding the missing girl and supported the cause. Obviously, conspiracies and government theories aside, Stranger Things plays a huge role in telling the story of how a mother deals with the tragedy of a missing child.

Stranger Things will air on Netflix in an eight episode arc that will likely lend enough horror and mystery aspects to tide you over before our favorite popular TV horror series come back in the fall, and it will be a welcome addition to Netflix's original series lineup.