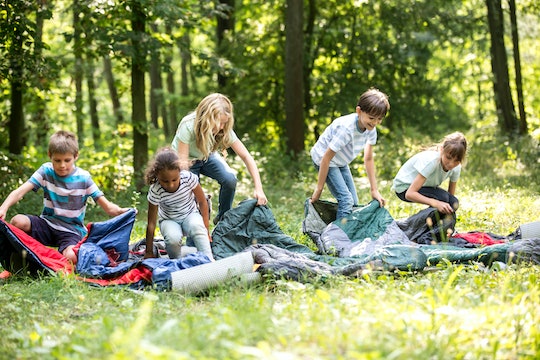 Is Summer Camp Even Happening This Year? Here's What The Experts Have To Say

For many kids, nothing says summer like a week or two (or even month or two) away studying STEM, theatre, nature, cooking, lanyard tying, or just plain independence at camp. For many families, summer camp has been a yearly tradition for generations. So right now, there are quite a lot of people wondering if summer camp is canceled this year. The answer really varies by location and camp type, because it's a big choice for any camp owner.

The decision of whether to reopen for summer 2020 depends on a particular camp's location, the types of activities offered, and directives from state and local health officials regarding protocols and limitations. It's a big call for each organization. Not all summer camps are of the sleepaway variety, of course; there are day camps of every length and variety. "The YMCA collectively operates 325 summer camps, and approaching 30 to 40% have decided not to reopen," Paul McEntire, chief operating officer for YMCA of the USA, tells Romper. "Others are working on their decisions." Other camps have similarly mixed responses. "For the most part, most summer camps we've talked to are still opening this summer. There have been a few smaller camps that have canceled their sessions, but the big camps seem to still be going forward with their sessions," summer camp consultant Mark Evans tells Romper. The responses vary tremendously, so reach out to a particular camp for more information about their decision for this summer.

Stuck in this unenviable position, summer camp managers have reached many different conclusions about whether to go forward with the 2020 summer season. "We will not be opening our physical art camp this year. It is possible that Las Vegas will allow businesses to reopen, but we feel we cannot enforce social distancing and safety measures properly with dozens of small children in our camps," Kimberly Crisostomo Bavington, founder of Art Classes for Kids, tells Romper. Others are pushing forward to open with some changes. "This year, we are opening our day camps but will have limited spaces available in order to provide more safety and comfort for families sending their kids to our camps. We are following state and other health guidelines as well," Ken Walter of Abacus Early Learning Centers, which operates summer day camps in Indiana, tells Romper. "The short answer is that we have a very different year for camps in Balboa Park. A couple of organizations have shifted to entirely virtual camp, a couple have plans for virtual camps but are also planning in-person options later in the summer, and the majority of organizations have canceled summer camp altogether," Michael Warburton, director of parkwide communications for San Diego's Balboa Park Cultural Partnership, tells Romper.

For camp owners who are still wrestling with the decision to reopen, health officials have published guidelines to help them understand and prepare for the challenges ahead. There's the Youth Program and Camp Decision Tree from the Centers for Disease Control and Prevention (CDC), which walks you through the decision process in a logical step-by-step manner. There's also the American Camp Association's Approach to COVID-19 field guide for camps on implementation of CDC guidance, complete with ample information on how to decide whether a particular camp should reopen and recommendations for keeping campers and workers safe (such as pre-screening kids for symptoms before their arrival at camp). The guide was created with the assistance of a panel of specialists in "pediatric medicine, camp medicine and nursing, epidemiology, infectious disease management, biological safety, industrial hygiene, organizational design, and other technical specialties," according to the ACA, and it seems to take every possible scenario into account.

One thing seems certain: Even if a camp decides to open for business this summer, it won't exactly be business as usual. As The New York Times reported, directors of sleepaway camps are considering measures such as keeping campers and potentially counselors on camp grounds all summer (no field trips or overnight trips). "Cabins would also likely have fewer campers, allowing for spacing of beds. Mealtimes might be staggered to avoid overcrowding of dining halls. Supplies, like pottery wheels and archery arrows, would be wiped down between campers; personal hygiene would be enforced far more than usual."

In addition, many camps are expecting to open later than originally planned (likely July), according to the NYT.

Both camp owners and parents are charged with difficult decisions this summer. (There's also the option of virtual summer camps as a sort of compromise.) For the most part, though, it looks like camp owners are making the call on an individual basis, and only reopening with serious safety measure in play.

Paul McEntire, chief operating officer for YMCA of the USA

More Like This
What Is RSV?
16 After-School Snacks For Hangry Kids
Tips For Apple Picking With Kids
What Parents Need To Know After DEA Issues Warning About "Rainbow Fentanyl"