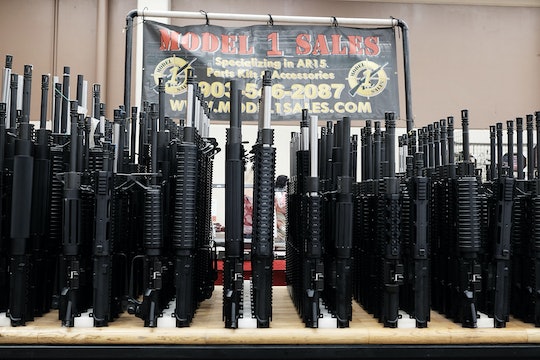 Is Terrorism The Biggest Threat To Our Kids? Not When Compared To Gun Violence Statistics

According to a Romper poll conducted in October, which asked 584 mothers about their views concerning the upcoming presidential election, 26 percent of moms have national security at the top of their minds when it comes to electing a new head of state. That's understandable, considering that the world is still reeling from a few large, recent terrorist attacks: Paris, Iraq, Syria, Brussels, Turkey, and Orlando all come to mind a little too easily. But is terrorism really the biggest threat to our kids?

The survey itself, while unscientific, was conducted by SurveyMonkey among women nationwide aged 18-54, with some 98 percent of those polled identifying as a millennial (ages 18-34). Of those surveyed, the majority fell under an annual household income of $75,000. Around 78 percent had children between the ages of 0-8 years old. In response to the question "Which issue do you care about most in this election?," 27 percent said lowering taxes, 26 percent said increasing national security and bettering foreign policy, and the remainder were split between climate change, abortion, paid family leave, and gun control. Four percent of women said they were concerned about the impending Supreme Court appointee.

While the extensive and persistent coverage of terrorist attacks could lead many to believe otherwise, terrorism is far from the most pressing issue in the United States. According to CNN, a person is four times more likely to get struck by lightning than to die in a terrorist attack. According to The Washington Post, it's more likely for the average American to be crushed to death by unstable furniture (televisions included) than for them to be killed in a terrorist attack. Considering that firearm deaths are now matching the number of car accident deaths in the United States, gun violence should also rank as a much, much larger concern for parents across the country.

A far scarier statistic? For children 1 to 18 years old, suicide and homicide remain one of the top three most common causes of death, and guns remain a big part of that. Guns are implicated in the large majority of homicides and suicides in the United States, and according to Everytown for Gun Safety, seven children a day are killed by firearms. And every 32 hours, an unintentional shooting involving a child occurs — which isn't surprising, considering 1.7 million children live in homes where guns are not locked away or are stored loaded, according to the International Business Times. Parents' improper storage of guns makes it 16 times more likely that children in those homes will be unintentionally shot, according to the Law Center to Prevent Gun Violence.

So when it comes to the presidential election, focusing on national security seems like a misplaced effort. What parents should really be analyzing is the different candidates' approaches to health care, their dedication to improving mental health, and their commitment to gun violence prevention. Because while news about terrorist attacks may feel heart-stopping, there are other threats that are far more likely to actually stop hearts.