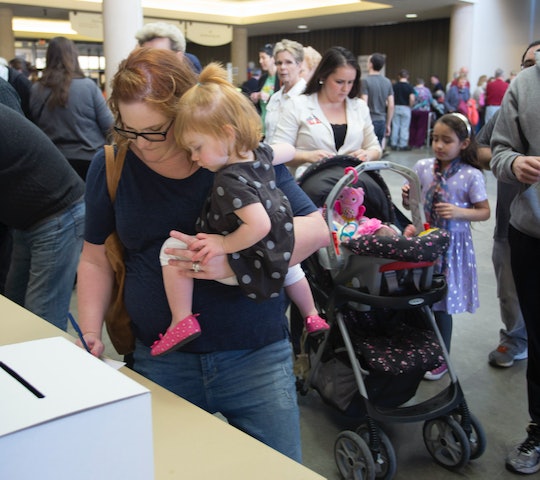 How Are Millennial Moms Voting In 2016? Not Necessarily The Way You Think

Amid the most controversy-filled U.S. presidential election in history, pollsters have kept a steady eye on several different voting blocs that could significantly impact the outcome: women, black and Latino Americans, uneducated white men, millennials. One group they don't seem to have paid much attention to, though, is an important one: young women with kids. How are millennial moms voting in 2016?

Considering that these 9 to 15 million women (estimates vary) are raising the next generation of Americans, we thought it was worth asking them. On Oct. 10, we conducted a survey of over 500 millennial moms, asking them which issues are most important to them as they head to their polling stations in November. Since Romper is a site for young parents, which includes a lot of new and expectant mothers, we were also curious to know if having kids changes your political views. And finally, there was the biggest question, in our minds at least: What did young women with kids think of Donald Trump's comments about women? We knew how our friends (in real life and on social media) felt about them, but what about other communities of moms across the country?

Before we get to the results, some quick info on our methodology: Using the online polling company SurveyMonkey, we put our questions to 584 women. Ninety-eight percent were between the ages of 18 and 34, and most (78 percent) had children 8 years old or younger. They were from all regions of the country, with the southern East Coast (Delaware, Maryland, District of Columbia, Virginia, West Virginia, North Carolina, South Carolina, Georgia, Florida) most heavily represented at 22 percent. Over 75 percent have an annual household income of $75,000 or less.

Some of their answers to our questions surprised us. You know how millennials have notoriously low voter turnout? Almost 90 percent of the women we polled said they. are. VOTING. in this election — despite the fact that their answers also reflect a deep distrust, even disgust, for not one but both of the major party candidates. A large segment said actually, parenting does change your political views. And in a survey conducted two days after the release of the Access Hollywood tape in which Trump said about women, "Grab ’em by the p*ssy. You can do anything," the number of millennial moms who weren't put off by Trump's comments was, for us, the most noteworthy data point of all.

But we think it's important to know, rather than assume, how young women with kids feel about this election. It was time someone actually asked them.

One more thing: We did this survey two weeks before the final debate, in which Trump called Hillary Clinton a "nasty woman" on national television, lied repeatedly and claimed all of the women accusing him of sexual assault are liars.