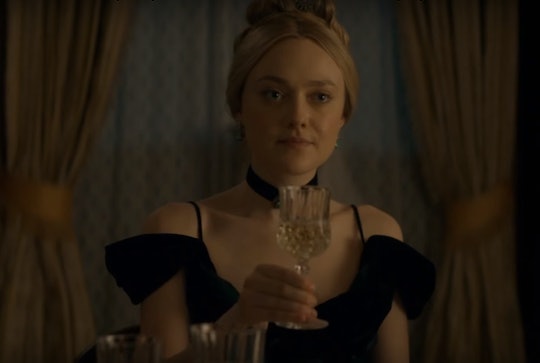 I don’t know about you, but I've always loved watching period dramas on TV. There's just something about meshing historical facts with storylines designed for pure drama and intrigue that automatically hook me. That’s why I think TNT’s new series The Alienist will end up becoming my next new obsession. But is The Alienist based on a true story? This project is looking to blend elements of fact with elements of fiction.

In actuality, the new show is based on a novel of the same name by author and historian Caleb Carr. The story takes place in 1896, following Dr. Laszlo Kreizler (played by Daniel Brühl) and his associate John Moore (played by Luke Evans) as they attempt to solve a string of murders using both psychology and newer methods of detective work, like fingerprinting. (Because yes, stuff like that wasn't always used back in the day, believe it or not.) The novel also includes a dramatization of Theodore Roosevelt, who was a New York City police commissioner before his presidency in 1901, and who will be featured in the series as well.

While most of the characters are pure fiction, save for a few novelized versions of historical figures of the time, there are aspects to The Alienist that draw from real life inspiration during the time period in which it takes place.

The term "alienist" was meant to describe a psychiatrist in that era and although you might at first think the show is about aliens or alien abductions, it’s actually about an early fascination with serial killers and takes places a few years after Jack the Ripper’s own infamous crime spree.

When The Alienist novel was released in 1994, author Carr spoke in an interview on Charlie Rose about trying to blend fact and fiction to create the novel, without inadvertently fooling anybody into thinking it was purely historic. However, he had to bend the truth to initially get his publicist to agree to read it. "I was very concerned with making the book as plausible as I could," he said, noting that at the time both his agent and publicist knew him as a non-fiction writer above all else. The case itself is completely made up for the novel and, according to Carr, "The killer and the people who track him down are completely fictitious, everything else in the book is absolutely true."

His inspiration for writing the novel was that he wanted to write something where psychological profiling was used in catching a serial killer. "So I made up a story about a psychiatrist and a killer, who have sort of dual backgrounds, which gives the psychiatrist insight into the killer," Carr said.

It might seem like another period drama, but there’s enough material in the books that The Alienist is based on to really get the new series off the ground and leave viewers hooked. Instead of being about DNA, or clues left behind by the killer in question, the goal is for the mysterious killer on The Alienist to be caught using only a psychological makeup, which is what helps to set it apart from some other stories of the same nature, like that of Silence of the Lambs, for example.

Since The Alienist was originally written by someone who also happens to be a historian, you can be sure that besides the actual plot, the setting will be as accurate as possible. So be sure to tune in for The Alienist series premiere, which airs Monday, Jan. 22 at 9 p.m. EST on TNT.