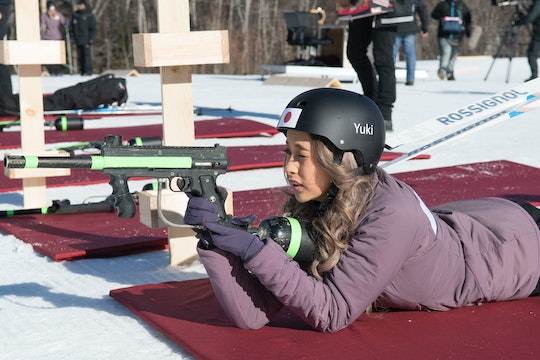 Here's How 'The Bachelor Winter Games' Differs From 'Bachelor In Paradise'

The Bachelor is trying its best to compete with the Winter Olympics by incorporating a new concept into its franchise with a four-episode spinoff entitled The Bachelor Winter Games. Fans of the summer spinoff may be wondering: is The Bachelor Winter Games like Bachelor in Paradise? The short answer is yes and no. A few things remain the same: Chris Harrison, wine, rose ceremonies, two episodes a week, and a bunch of The Bachelor/Bachelorette alums mixed up together in the hopes of finding love. But there are also some key differences, namely, winter sports.

The Bachelor Winter Games filmed at a luxurious private mountain resort in Wilmington, Vermont called The Hermitage Club at Haystack Mountain. It's nestled in the Green Mountain range and it promises both spectacular views and luxe accommodations for the competitors. In fact, it's the only private ski club on the entire east coast. While there, contestants will compete against each other for date cards by participating in a range of winter sports modeled after Winter Olympic events. They'll try their hand at winter biathlon, ice dancing, and more, all in the hopes of 1.) not breaking their ankles and 2.) getting a one-on-one date with a Bachelor alum they've been crushing on.

This differs a little from the Bachelor in Paradise format, where contestants are given date cards at random. (And by "at random," I mean, "depending on how dramatically upended a steady pairing would be by a date card from a third party." It's all meticulously crafted by producers, of course, but the contestants don't necessarily know what's coming.)

The Bachelor Winter Games incorporates a tongue-in-cheek "opening ceremony" through the streets of Wilmington, complete with a parade of nations. Special guest judges are even signing on to oversee the competition, including former Olympic figure skater Nancy Kerrigan. Chris Harrison, who presumably doesn't know much about the ins and outs of winter biathlons, will also be joined by veteran female sports announcer Hannah Storm and KTLA sports reporter Ashley Brewer. Harrison will handle the rose ceremonies while Storm and Brewer help him out on sports coverage. Happily partnered Bachelor alums will make guest appearances, too, including JoJo Fletcher, Ryan and Trista Sutter, Arie Luyendyk, Jr., and Rachel Lindsay.

Finally, The Bachelor Winter Games differs from Bachelor in Paradise in that it includes alums from international versions of The Bachelor/Bachelorette. To compete with The Olympics, it pits members of "Team USA" — which is comprised of Ben Higgins, Lesley Murphy, Clare Crawley, Ashley Iaconetti, Michael Garofola, Luke Pell, Josiah Graham, Jamey Kocan, Eric Bigger, Dean Unglert, Bibiana Julian, and Lauren Griffin — against teams from Sweden, Australia, New Zealand, Canada, Switzerland and Germany, Finland, the United Kingdom, Japan, and China. (Although a couple of those international teams have just one player, so it remains to be seen whether the show will take on a Team USA versus everyone else vibe.)

By day, contestants are competing against each other for date cards, but at night, the show will take on a more traditional Bachelor in Paradise format. There's lots of flirting and drinking (and in the case of my girl Ashley I., crying) while the competitors try their best to strike a romantic spark.

At the end of each episode, a rose ceremony will whittle down the contestant pool and, just a hunch, but I think the contestants who suffer the biggest language and cultural barriers might be sent home first. The hugely stacked Team USA suggests we're supposed to be rooting for the hometown heroes and longtime fan favorites to pair up. Regardless, it should make for some pretty interesting television.