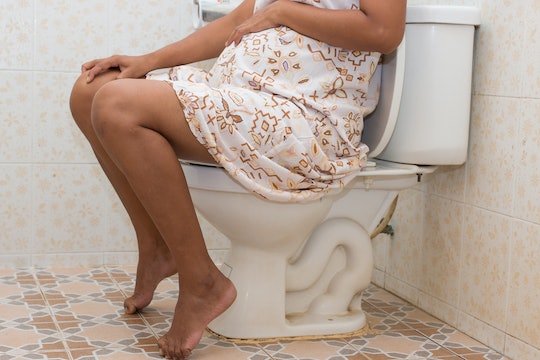 Here's The Difference Between The Bloody Show & Your Mucus Plug, Because Pregnancy

There is a lot that leads up to childbirth, and honestly, a lot of it is gross and uncomfortable. Like, losing your mucus plug, possible Braxton Hicks contractions, and you may have to fight an overwhelming urge to repaint your whole house. Also, there's the notorious bloody show. (Does this sound like Shakespeare or what?) But, is the bloody show the same as the mucus plug? Or do you literally have more than one super gross thing coming out of you to say that labor is near?

When I first heard of "the bloody show," I wasn't sure what my healthcare providers were talking about. It sounded rather off-putting. What is this show? Where does it happen? When? These were all questions I needed answers to, like, immediately. In my mind, I'd built it up to be some sort of awful rush of blood and viscera pouring forth from between my legs, shooting out like Old Faithful or Vagina Falls. It sounded like it would be the cross between a horrifying scene from the late Wes Craven, and it may also possibly mean I'd have to name my child Damien.

While I may be an actor, and therefore prone to fits of hysteria, if you name something the bloody show, really, who's going to think it's just a streak of blood? No one, that's who. But, some scholar or midwife with a sick sense of humor coined the term and it stuck — unlike the cervical mucus plug that brings it forth. But what's the difference between your bloody show and the mucus plug?

It turns out, they're not exactly the same thing. While they are connected, and appear together, they are slightly different, according to the Integrated Approach to Obstetrics and Gynaecology.

The cervical mucus plug "is a large, complex structure within the cervical canal that is shed shortly before or during labor," according to Acta Obstetricia et Gynecologica Scandinavica. The article noted that the mucus plug acts as a gatekeeper for the uterus. It works to prevent ascending infections from breaching the uterus and helps prevent premature delivery. "The viscoelastic properties of the cervical mucus plug are determined by mucins (large glycoproteins), which can inhibit viral replication and exclude larger molecules and bacteria by preventing their diffusion through the plug," according to the research. There are also immunologic factors at work with the plug which help block bacterial infection and trigger immune response. It detaches from the cervix as the cervix thins late in pregnancy, and is eventually disposed from the vagina.

Now, the bloody show is involved in the loss of the mucus plug, but it is not the mucus plug itself. According to Bleeding During Pregnancy, the cervical plug or mucus plug is merely a vehicle for the aforementioned bloody show. The bloody show is the blood that is released from the cervix with the loss of the mucus plug. While it's typically just a few tablespoons of dark, rust-colored blood with a few drops of red, it is sometimes more. If there is a great deal of blood, specifically of the bright red variety, that may signal a problem like placental abruption or placenta previa or placenta accreta, and it needs to be evaluated immediately.

In the end, my "bloody show" was definitely gross, but it wasn't scarring or anything. It's more along the lines of dense vaginal discharge that's clear and has a few streaks of blood. After I lost mine, it took a few days before I went into labor, which is when the term bloody show makes so much more sense than just a freaking streak of old blood in my knickers. If you've seen your bloody show, you can at least rest in the knowledge that your body is preparing for the grand entrance of your little one, even though you've likely just ruined a pair of underwear.