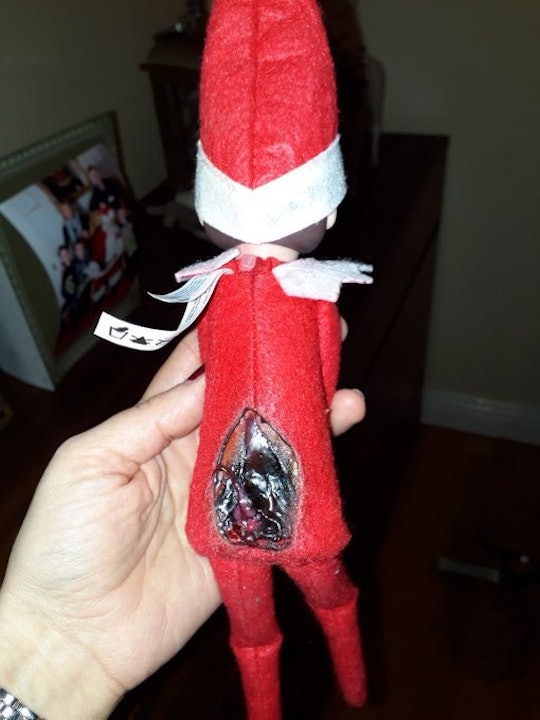 This Family's Elf On The Shelf Almost Burned Their House Down, Firefighters Warn

Coming up with creative Elf on the Shelf ideas night after night is enough to make any mom a little scatterbrained, but what happened to one family is proof that we all need to think our Elf-related plans through before carrying them out. According to firefighters, a dangerously placed Elf on the Shelf almost burned down a house in Dublin (and the mistake was one any of us could have made).

As the Dublin Fire Brigade posted on Twitter, an Elf suffered the kind of burns that would have landed her in the North Pole E.R. for sure (if that were a thing) when she got too close to a lamp. Thankfully, the parents found her in time... otherwise their entire home might have ended up similarly scorched:

Yowch!! "Keep all decorations away from heat" might just be the most important advice you get this holiday season. It's a miracle the Elf took this long to melt — guess they're made of sturdier stuff than we thought — and that no actual, living members of the family were injured. We're imagining it took some time for the smell of Toasted Elf to fade, though. ("Toasted Elf" = The worst scented Christmas candle idea ever?)

This isn't the first time an Elf on the Shelf has proven to be something of a pyromaniac over the years, either. In Maryland, an Elf on a ceiling fan got too close to the light fixture, starting a small fire; another small blaze started in Alberta, Canada when one was hidden near a light bulb. Hey, we get it: There are only so many places to hide that dang thing. But when you're searching your house for spots, heed this warning from the Massachusetts State Fire Marshall's Office and keep your Elf "at least a foot away from light bulbs, especially incandescent ones, that burn at a hotter temperature.”

This might seem like a common sense precaution, but when you consider how many extra lights people tend to put around their homes during the holidays, it's easy to see how someone might unintentionally slip up. And while we're on the subject, the Elf is far from the only fire hazard you might have in your home at this time of year. According to the National Fire Protection Association, while Christmas tree fires aren't common, when they do happen they tend to be serious. You can help keep your family safe by choosing a tree with fresh, green needles, making sure that it's placed at least three feet from heat sources like fireplaces, radiators, candles, heat vents or lights (besides tree lights approved for indoor use, of course), and turning off the lights before you go to bed. Also, make sure you don't keep it up for too long after the 25th, as dried-out trees are more likely to go up in flames.

The good news is, since your kids technically aren't allowed to touch the Elf — lest he lose his magic — you at least don't have to worry about them putting the little fellow in any precarious positions. (Actually, that's probably not something you can count on, but in theory it works.)

All in all, we'd have to say this Elf in Dublin fared a lot better than her colleague in Florida who was mauled by the family dog and subsequently taken to a real hospital E.R. for lifesaving surgery. (Fortunately for that Elf, his owner's mom happens to be the nurse manager for the emergency department at the Arnold Palmer Hospital for Children in Orlando.) Who knew being an Elf was such a dangerous job?