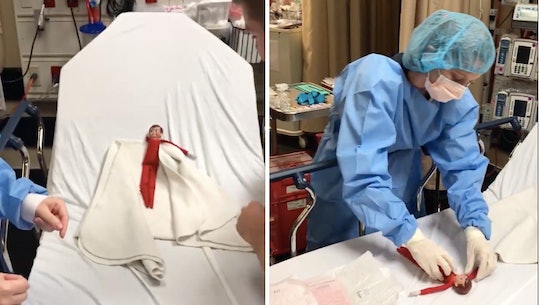 Oh, the lengths parents will go to keep the holiday magic alive for their kids. The elaborate schemes so many contrive (including myself) to shield their children from the cold, harsh reality of a world without Santa and his elves. I'm not going to lie; I just felt slightly panicked even typing those words on the off-chance a small child might read them. Santa has always been well-guarded, but now we have to worry about his (oft creepy) little helper, the Elf on the Shelf. This mom who went above and beyond for her daughter's "injured" Elf on the Shelf wins the gold medal for sweet kid duping in 2017. The things we do for love.

Jenn Thelen of Orlando, Florida, had to think on her feet on Monday morning. When she and her 7-year-old daughter Aubrie woke up, they made a grisly discovery; the family's German Shepard, Zoey, had attacked the little girl's Elf on the Shelf in the night, according to HuffPost. Aubrie was apparently devastated; she really loved the elf, who she named Sam, and dissolved into tears when she realized Zoey had ripped Sam's arm from his body. Thelen told Babble that the carnage was pretty terrible:

His right arm was ripped off, he had a big tear in both his left arm and right leg, and a chunk off his cheek.

Luckily for Aubrie (and Sam), Thelen is the nurse manager for the emergency department at the Arnold Palmer Hospital for Children in Orlando.

And she decided drastic times called for drastic measures. Because when your 7-year-old is crying over her mangled elf, there's pretty much nothing a mom won't do to fix the situation.

Thelen wrapped Sam in a blanket to prevent her human touch draining him of his magical powers and delivered him to the hospital, where a crack team of magical doctors were waiting to fix him up. In a video shared to the hospital's Facebook page, Sam is wheeled in on a gurney by urgent-looking medical professionals. According to the viral post on Facebook, which has been viewed more than 145,00 times:

Jenn took Sam with her to work that morning, and after careful planning, the medical team wheeled him into the trauma bay. The team used expired medical products to work on the elf, and even used a special pair of Santa’s magic gloves. Aubrie knew that the elf could not be touched but Jenn told her that the “magic gloves” would allow the team to work on Sam. One of our ER team members, Ashley, carefully put Sam back together again and bandaged his injuries all up. She even sprinkled some Christmas magic (glitter) on Sam when she was done. Sam was able to go home to Aubrie later that evening.

Thelen told Babble that she showed Aubrie the video so that she would know Sam had been taken care of properly. The super detail-oriented mom even told Babble:

We glued red construction paper on the outside of the gloves and wrote "Magical Santa Gloves" and "North Pole Medical Supply" so Aubrie knew the elf was OK to be touched with them.

Now Sam is back home where he belongs, watching over his friend Aubrie and her mom, who probably earned serious brownie points for going to such great lengths to make sure her daughter's belief in magic was preserved for another Christmas. As Thelen told HuffPost:

We always talk about Christmas magic with our kids. Aubrie is a very analytical kid, so she wants to know details about everything. So, we explained that Christmas magic is a way that Santa and the elves are able to do things that maybe normally wouldn’t make sense.

Whether or not Zoey the German Shepard has learned an important lesson about Christmas magic remains to be seen.