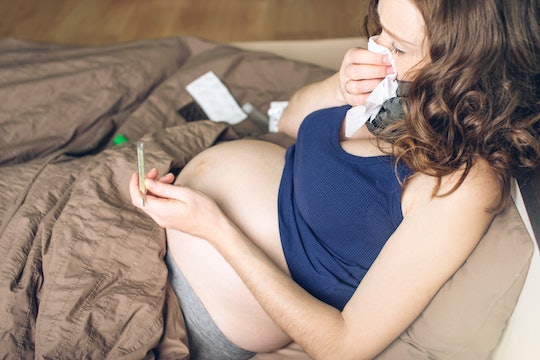 No, Really — You *Do* Need The Flu Shot During Pregnancy & Here's Why

Getting the flu sucks. In 2009, the year after I had my son, I totally spaced and forgot to get my flu shot. When your husband is a police officer, and therefore exposed to every virus known to man, this is a really bad idea. My husband and son both got theirs, but I got lost in the fray. I came down with the worst flu of my life, and miserable doesn't begin to cover how I felt. What if it'd happened just the year before? Is the flu worse during pregnancy, or does it just suck across the board?

Getting the flu is horrible no matter when you get it, but according to the Centers for Disease Control and Prevention (CDC), the changes that occur in your body during pregnancy increase the effects and the possible damage done by the flu virus. Not only are you in an immunocompromised state during your pregnancy, but your heart and lungs undergo significant changes while you're pregnant that exacerbate the symptoms of influenza, increasing the danger of a disease that is already possibly deadly.

Beyond the dangers to you that the flu represents, there are also dangers to your unborn baby. According to The March of Dimes, women who experience the flu during pregnancy are more likely to go into labor early — before 37 weeks. There is also the risk of birth defects associated with the high fever that typically accompanies flu.

According to the American College of Obstetrics and Gynecology, every pregnant woman, regardless of trimester, should receive the flu shot not only to protect them from the disease responsible for one in 10 maternal deaths per year, but also to protect their child from the flu after they're born. Note that I said flu shot, as the nasal spray is not recommended in pregnancy.

Babies under 6 months of age rely on not being exposed to the flu virus to keep them safe. Also, according to the Oklahoma State Department of Health, those antibodies from the flu vaccine are passed in breast milk, giving another layer of protection to your growing baby if you choose to breastfeed your child.

According to a study completed by the CDC, pregnant women are more likely to be hospitalized with the flu than those who aren't. Pregnant women with the flu require more rigid monitoring, as well as being more likely to be admitted to the intensive care unit than other healthy women of the same age who aren't pregnant. A recent study from Stanford suggested that the severe symptoms are not simply because a woman is immunosuppressed either. They found that it's likely that there is a severe immune response that is triggered by the presence of the flu virus, making problems like severe congestion and high fever worse because your body is working so hard to combat the problem by amping up its immune response to protect your body and that of your baby.

The flu is nothing to be messed around with. While it's easy to worry about the efficacy and dangers related to the vaccine itself, it's more important to protect yourself and your child as much as you can. Beyond just the vaccine, make sure you're frequently washing your hands and avoid touching your eyes, nose, or mouth while you're out and about. Try to avoid congested spaces where the flu is likely to be present, and if you do think you're coming down with the flu, contact your doctor immediately so that you can start the treatment before it becomes a dire emergency. Being sick at any time is unpleasant. Being sick while you're pregnant is the worst.