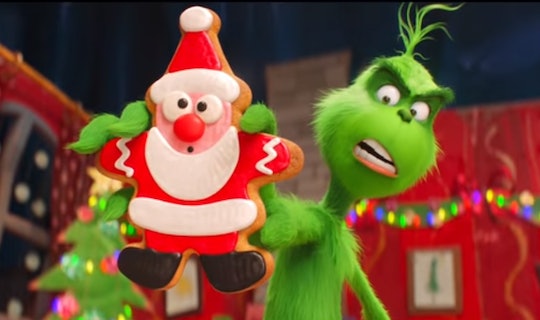 If You're Looking For A Holiday Flick For The Whole Family, 'The Grinch' Won't Disappoint

One of the most beloved stories from Dr. Seuss is returning to the big screen this holiday season, in a new fully-animated feature starring none other than Benedict Cumberbatch. But even though it’s a animated film, there are a few things parents might want to consider as they wonder if The Grinch is appropriate for kids under 5 years old.

The last time this furry, green grouch landed on movie screens was as part of a live-action depiction starring Jim Carrey in 2000. That Grinch was definitely not meant for the littlest of eyes, with exaggerated features that played up an almost cadaverous appearance. But this time around, as seen in the trailer, the Grinch is closer to the 1966 animated version that was filmed as a TV movie and which many of us enjoyed laughing at in our own childhoods. He’s still a grumpy soul, and full of ill-will. But as far as anything too jarring for little ones, the producers have been pretty careful.

This new version is rated PG by the Motion Picture Association of America for brief, rude humor, according to the movie’s IMDb page. Those are jokes that would probably go right over younger heads, but a mischievous 4 or 5-year-old might catch on.

There is also a lot going on in this movie so it's sure to keep the attention of a young, easily distracted mind. But it might also be too much stimulation for younger children or one who is sensitive. The colors are vibrant and plentiful, the jokes come quickly, and the action keeps moving at a nice clip. It looks to be something that young kids will find entertaining and attention-grabbing.

Common Sense Media, an organization that reviews film for family-centered content, notes that newest version of The Grinch is produced by one of same people who put together Despicable Me and Sing. Chris Meledandri’s credits also include Minions, Ice Age, and Horton Hears a Who!, according to his IMDb page, so he has helmed some of the best entertainment out there for young minds.

With that said, Common Sense Media suggests that The Grinch is best reserved for children 6 years old and up, but of course every parent knows their child best. Violence, in the form of pratfalls, seem to be the organization's biggest concern for young minds.

This version of the story stays faithful to the 1957 book written by Dr. Seuss, according to Common Sense Media. The Grinch, in his home overlooking Whoville, is annoyed to no end by the sights and sounds of Christmas and embarks on a mission to steal Christmas. The trailer shows the setup that proves the Grinch is the ultimate spoilsport, including one clip of him pegging a child in the face with a snowball. Some parents who are opposed to their children seeing any kind of negative behavior will probably want to skip this movie with their little one, because if the movie follows the book, the Grinch is full of little else until his redemptive moment near the end.

Publicity for the film seems to be targeting parents as much as anything else, since a series of billboards has rolled out with tongue-in-cheek mean messages. The ones in Los Angeles, for example, taunt would-be actors in the city with lines like “Of course you’ll make it as an actor” and “Oh, you’re trying to make it in Hollywood? Let me know how that goes”, according to LAist.

Overall the production value and fun story of The Grinch seem to make this movie that will be family-friendly and good for all but the very youngest viewers, who might be startled by some of the action.

Look for it in theaters on Friday, Nov. 9.