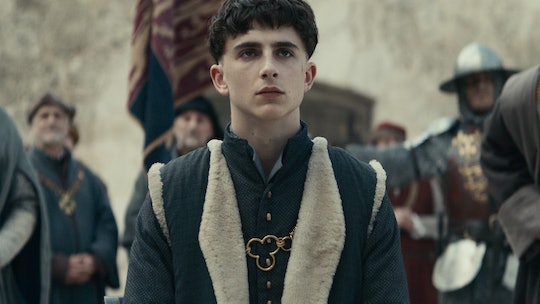 Timothée Chalamet traded his hand-rolled cigarettes for a bowl cut, and honestly, I'm not even mad. On Aug. 27, Netflix dropped the trailer for The King, and fans are already fawning over the Call Me by Your Name actor's new leading role as King Henry V of England. The preview for Netflix's latest movie sets up enough betrayal and schemes to align itself with works by William Shakespeare, leaving viewers curious about the origins of the royal epic. So is The King based on Shakespeare? There's a reason why the period piece feels so familiar.

To put it simply, the screenplay for The King is an adaptation of Shakespeare's Henry IV: Part One, Henry IV: Part Two, and Henry V, according to IndieWire. The film, as described by Netflix, follows Hal (Chalamet), a "wayward prince and reluctant heir to the English throne" who abandons his royal life to live among the commoners. However, when his father — the tyrannical King Henry IV — dies, Hal is forced on the throne he so desperately wanted to relinquish. Now crowned King Henry V, Hal must "navigate the palace politics, chaos and war his father left behind, and the emotional strings of his past life."

Although The King is gearing up for its premiere on Nov. 1, the Netflix film inspired by Shakespearean tragedies has been in the works for a long time. Back in 2016, Joel Edgerton revealed he and director David Michôd were working on a "Game of Thrones meets Shakespeare" drama in an interview with IndieWire.

"We’ve written Henry IV and Henry V as a period film, but with our own dialogue," he said. "For lack of a better word, [it’s] Game Of Thrones meets Shakespeare only in that, you can watch Game Of Thrones and understand what’s going on."

The King's producer, writer, and star then opened up about the movie, explaining viewers won't have a hard time keeping up. "I feel like, with complete deference to Shakespeare, there is something that happens when even the most intelligent people watch Shakespeare. They feel stupid, because he does the kind of roundabout version of telling you simple things," Edgerton shared. "So, we just wanted to let the audience understand exactly what’s going on, and not just some people, but everybody."

That being said, there are a number of reasons why it has taken so long for The King to be released. "It’s a slightly expensive movie to make," Edgerton said. "Anyone who knows Henry V knows that it’s not exactly a Rocky ending. It’s got an ironic victorious yet bitter ending, so when put that into the business machine of Hollywood, it’s not exactly a home run."

It might have taken a few years, but The King is finally coming to Netflix. And if there's anything I've gathered from the star-studded teaser trailer, it's that the period drama led by Chalamet, Edgerton, and Robert Pattinson in a glorious House Lannister-esque wig, will be worth the wait. All hail the king.

The King premieres Nov. 1 on Netflix.