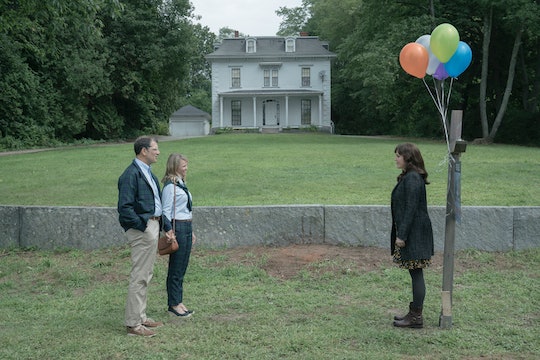 While it wasn’t created by Stephen King himself, Castle Rock takes inspiration from his vast body of work. The show is centered around King’s fictional town of Castle Rock, and features places like Shawshank Prison and Juniper Hill Psychiatric Hospital taken straight from his books. But the town’s new murder-themed inn seems to share a few similarities with another famous hotel from King’s world. Was the Lacy house inspired by the Overlook Hotel from The Shining? Because both places have seen their fair share of blood.

Castle Rock writers and creators, Dustin Thomason and Sam Shaw haven’t detailed any links between the Lacy House / Castle Rock Bed and Breakfast and the Overlook Hotel, but they have talked about using King’s novel as inspiration for the series. In an interview with Talk Nerdy With Us at 2018 San Diego Comic Con, the duo discussed how they tried to recreate the psychological thrill of The Shining throughout the show. “We tried to anatomize what it is that makes a Stephen King story a Stephen King story. Like when those books are most transporting, what is essential to the DNA of the stories, and then to try to reverse engineer it ourselves,” said Shaw. “If you look at The Shining, there’s a relatively low body count, but there is something so haring — about the idea that you might lose your bearings and find yourself in a position where you hurt the people you love best.”

Warning: Spoilers for Episode 8 of Castle Rock ahead

As far as the house on the show is concerned, it has a pretty murderous history — which definitely adds to its creep-factor. It was initially the home of Warden Dale Lacy, who committed suicide after locking The Kid in a prison dungeon for 27 years. In a voiceover in Episode 2, Lacy details the brutal history of his home, with scenes of a bloody body in a tub, and then a stern-faced wife killing her husband by leaking gas into the house. “Every inch is stained with someone’s sin,” says Lacy. “I lie awake at night thinking about all the blood spilled under my roof alone. People say it wasn’t me, it was this place. And the thing is, they’re right.” Any fan of The Shining should be able to see the resemblance to the Overlook — the haunted hotel that inspired Jack Torrance to try to axe murder his wife and son.

The new owners of the Lacy House — an Iowa professor named Gordon (Mark Harelik) who has done his Ph.D research on the BTK serial killer, and his cheating wife (Lauren Bowles) — turn the home into a murder-themed bed-and-breakfast, honoring the murders that took place throughout the years in Castle Rock. While they seem to be a normal couple working things out on the surface, in Episode 8, they fall into a murderous rampage, killing the first guests to stay there.

In The Shining, it was the spirits of the Overlook Hotel who were driving Jack Torrance to kill his family. In Castle Rock, it’s not clear if there are spirits ruling the house, but it was awesome to see Jack Torrance’s niece, Jackie aka Diane Torrance (Jane Levy) come save the day. When Henry Deaver breaks in to the house to find clues about his past, Gordon and his wife attack him. The wife dies of a self-inflicted knife wound, and as Gordon pummels Henry to the ground, Jackie kills him with an axe from behind — a total throwback to Jack Torrance’s weapon of choice in The Shining.

But while there aren't direct references to a spiritual influence, Reddit user SpiritPaintedSin pointed out the comment Jackie made to the police after killing Gordon. “Jackie says ‘it's like I wasn't myself anymore’ to the police in recounting how she stabbed Gordon to save Henry,” wrote the Redditor. “Now, this one is interesting to me because she could just be having a dissociative moment because of the trauma of killing someone. But I think it would be folly to ignore that this COULD have something to do with Henry.”

Whether Jackie killed Gordon under the influence of something evil is still a mystery, but there’s no doubt that the house has seen its fair share of bloodshed. In The Shining, the Overlook Hotel itself was the villain of the story, so it will be interesting to see if Lacy’s house has a role to play in the larger scheme of things, and whether or not it’s connected to the mayhem that has taken over the town.

New episodes of Castle Rock air on Wednesdays on Hulu.