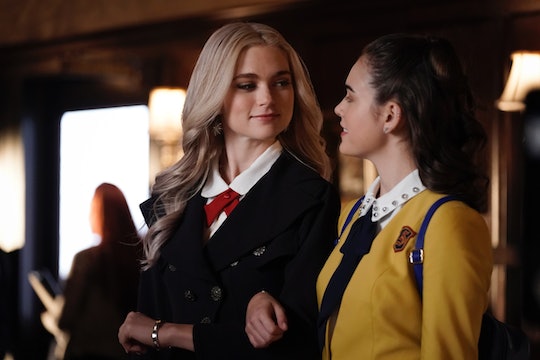 Everything You Need To Know About The 'Legacies' Musical Episode

It always fun when a TV show changes it pace to do something different and exciting, and this week, Legacies is doing just that. The latest episode, titled “We’re Gonna Need A Spotlight,” has the supernatural students singing their hearts out for a school talent show. Fans are already smitten with this talented cast, but seeing the actors take to the stage has fans wondering if the Legacies cast is really singing or not.

Believe it or not, this talented group of actors is actually singing, and in behind the scenes sneak peek, the showrunners and cast spilled all the melodious details. “There is a lot going on in this episode,” actress Kaylee Bryant (Josie) says in the clip. “Aria Shahghasemi is singing, I’m singing, Chris Lee is singing, and Peyton is doing spoken word poetry.”

It turns out, finding voices for this episode didn’t prove to be too hard for Legacies showrunners. The cast includes talented singers, like Bryant, Aria Shahghasemi (Landon), and Chris De'Sean Lee (Kaleb) — who had a leading role in the Chicago production of Hamilton. “What’s great about this is we found that the actors have these hidden talents that are amazing,” choreographer Billy Rugh says in the video. “For instance, Josie can sing, so we built a whole number around that.”

During the episode, a mind altering parasite invades the school via the cutest unicorn ever, prompting the students and staff to put on a talent show. “Some people are feeling a little out of character because they’ve been infected by a mind controlling slug,” Jenny Boyd (Lizzie) says in the clip. Alaric and the students are letting their their guard down despite the threat of Malivore, says showrunner Julie Plec, but it's only because the parasite is trying to distract them. “When your inhibitions supernaturally get lowered, some crazy antics and behavior come out,” she says in the clip.

With only a handful of episodes left in the season, the drama and excitement on Legacies seems to be ramping up quickly. In an interview with Collider, Plec revealed that fans are in for some fun, because the second half of the season is just going to keep getting better. “Legacies is at its midpoint of the season, so we’ve finished our first chapter and have given as many answers as we could give about our mythology while still opening the doors for all this new mystery to take us through the rest of the season,” said Plec.

“Now, we’re in the second chapter, where we have a new artifact at the school, which is a new magnet for these monsters, and we have some of the most amazing – some terrifying and some hilarious – monsters coming our way — There’s so much coming, and it’s hilarious, wonderful, emotional, and scary. It’s a whole barrel full of good times.”

While it may not be an ideal situation in terms of saving the world from the Malivore apocalypse, with all the doom and gloom Alaric and his students are continuously facing, it is refreshing to see them take a break and finally let loose a little. Personally, I'm not a fan of mind-controlling slugs, but I'd do anything to see Kaleb take the stage and perform one more time.

New episodes of Legacies air on Thursdays, at 9 p.m. ET on The CW.