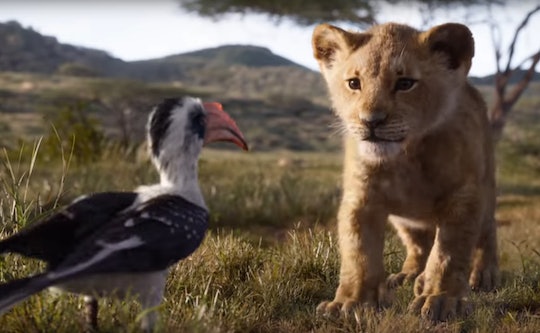 Knowing when to expose your little ones to a particular movie can be a tough decision, especially when it's one you love so much yourself. And with one of Disney’s most beloved films coming back to the big screen as a live-action remake this weekend, many parents of little ones may be wondering if the new Lion King is appropriate for toddlers — so here's what you need to know before buying tickets for the whole family.

The Lion King is, categorically, one of the best movies ever made. OK, that’s my opinion, but it's still a childhood favorite for many. But there are a couple of intense and inarguably sad scenes in the film that involve subjects such as fighting and death. This live-action remake hews closely to the plot line of the original 1994 animated film, so if you've yet to see the first one, please note there are some spoilers ahead. But, because it resembles the first film so closely — in a photorealistic format — is it OK for the littlest of littles?

As for the first, 1994 version of the film, parental reviews on Common Sense Media are a bit all over the place, with some parents suggesting that it’s a movie for ages 10 and up, and the website noting it's OK for kids ages 6 and up. Other reviews, however, say it’s good for everyone. The answer really lies with how sensitive your child is — if they are easily frightened, then seeing something like the stampede scene, for instance, on the big screen might be too intense. On the other hand, since most parents probably already know the tale, there's the option to tell them to cover their eyes for the scary moments.

As for the 2019 remake — which is rated PG — Common Sense Media notes that while it's "visually stunning," the new film "is darker, more violent," and recommends it for children 8 years old and up, so parents will likely want to proceed with caution with this movie. Because of how realistic the animals and scenery look in the remake, according to Common Sense Media, "the violence is definitely more intense and potentially upsetting here than in the more cartoony classic."

On the Disney forum website Disboards, one parent posed the question about age-appropriateness of the original The Lion King for their 3-year-old. According to one parent who replied, her 2-and-half-year-old was only bothered by the scene with fire. Another parent shared that their 4-year-old had no problem with the iconic death scene, but probably didn’t really understand the gravity of it. Another shared that for their 20-month-old daughter, none of it was a problem for her.

With all that said, it's possible that for some children that young, the funny and sweet moments — ahem, Timon and Pumbaa — will be so enjoyable that the heavy and intense moments may just go right over their heads.

Back in 1994, when the original film was released, the Los Angeles Times did a deep-dive into the question of how-young-is-too-young to see The Lion King, and found different opinions from parents and psychologists. According to the newspaper, the “tenor of critical cautions” is that the original Lion King has things like "wild-eyes hyenas" and a "prolonged scene of a parent’s death that leaves the heart-wrenching aspects of Bambi in the dust," details that are very much included in the new version as well.

But one child psychologist told the Los Angeles Times in 1994 that shielding kids from those elements is not within their best interests: "Children do experience feelings of sadness and apprehension. Parents need to let them have those experiences, and be there to help them and guide them."

Before seeing The Lion King when it arrives in theaters on July 19, parents may want to consider discussing those emotional and violent moments in the film with their kids in advance. Another option is to watch the 1994 cartoon version together first and see how they react, as Common Sense Media noted in its review that the realism of the 2019 film makes things more intense for younger audiences.

As always, parents know their child best, so the decision about whether this iteration of The Lion King is too intense for toddlers will rest on your understanding of your child’s sensitivity. The good news? As the Desert News noted in its review of the movie, there aren't any big changes to the storyline, so you also know the elements that could be too intense for your little one in advance. For some toddlers, it may be best to sit this one out for now. For other, older kids, however, with some preparation and discussions beforehand, they may really enjoy The Lion King.