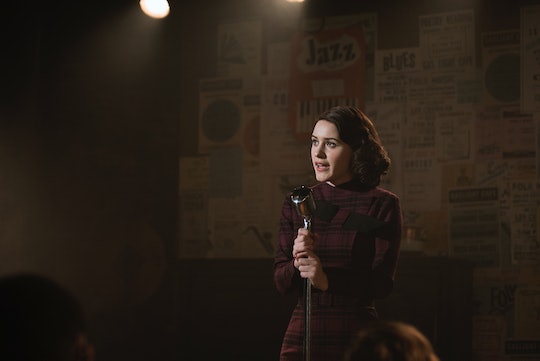 Here's Why You Probably Won't See 'The Marvelous Mrs. Maisel' On Netflix

Nothing is more frustrating than hearing your friends gush about a new show before you get to see it. Everyone's latest obsession is an Amazon Prime Original, but if you don't shell out for the service, can you watch The Marvelous Mrs. Maisel on Netflix? Unfortunately, as it currently stands, you cannot. Although you can find all kinds of shows, despite their network, on both Netflix and Amazon, when it comes to their originals, the streaming services like keeping them close.

Asking to watch an Amazon Original on Netflix is like... well, it's asking a lot from the media companies. If you don't normally watch TV using an Amazon app, but have Prime for shipping or something else, you can watch The Marvelous Mrs. Maisel for free. The video part isn't extra. However, if you don't have Prime, you can't purchase the show episode by episode, which is how they get you. But you can sign up for a free, month-long Prime trial (and just set a reminder to cancel the membership before it renews, that is, if you don't get addicted to the perks) to see what everyone's talking about.

The show was nominated for two Golden Globe awards, and because of all the rave reviews the show received, Amazon has already signed on for a second season. All of this just means that if you only roll with Netflix, you're probably going to be missing out. I hate to be the one to break it to you.

In case you've somehow been sleeping on this show, it's a comedy by Amy Sherman-Palladino, the creator of Gilmore Girls, and has the same sort of comedic timing and quick dialogue that you can find in Stars Hollow. But this show is set in 1950s New York City and is way cooler than Lorelai and Rory will ever be. (Sorry, I'm not sorry.)

The show is all about Miriam "Midge" Maisel," played by Rachel Brosnahan, a 1950s Jewish housewife on the Upper West Side. One day, her husband, who originally wanted to be a standup comic, up and leaves her for his secretary, leading her, somehow, to a Greenwich Village comedy club, where she learns that she's actually a really good comedian.

Hilarity ensues as she tries to make a name for herself as a comic, meets a fictional version of Lenny Bruce, and even has to buck the police who come after her for talking about sex on stage.

It's just the kind of feminist comedy so many people need right now. And, according to New York's The Cut, it has some of the best costumes on television. Think of it like Mad Men, but with just the very fashionable and hilarious women.

Sherman-Palladino said that she modeled Maisel's character after Joan Rivers. In a Vanity Fair interview she explained:

I’m a massive Joan Rivers fan; the world is sadder without her, and will always be sadder without her. And she had that wonderful mix, that battle of wanting to be accepted on a feminine level — [but] you can’t have that many balls and be accepted on a feminine level. It just doesn’t work that way. It was such a wonderful dichotomy, and she crafted those monster jokes.

The only difference between Maisel and Rivers, according to Brosnahan in the same interview, is that Rivers was mainly funny because she felt like an outsider. Midge, on the other hand, comes to comedy by chance, only after her world as an Upper West Side housewife, which she loved, blows up in her face. So it's not based on a true story, but it's inspired by real-life role models.

So if you don't have Amazon Prime, you're totally missing out. As annoying as it is that you can't find The Marvelous Mrs. Maisel on Netflix, you might want to just suck it up for this one. If only to see what the fuss is about.