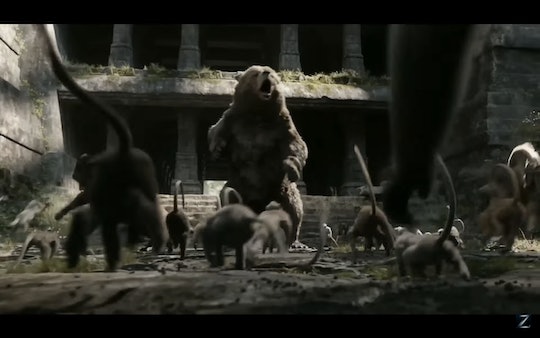 Is The Monkey Temple In 'The Jungle Book' A Real Place? Travelers Are Itching To Know

Disney's newest version of The Jungle Book has been leaving audiences across the country pretty spell-bound. The 3D production has a look and feel that's incredibly lifelike — although the talking animals should give viewers a clue that the movie is pretty CGI-heavy. What about the places in it, though? Is the Jungle Book monkey temple real, or at least based on a similar temple? If it is, can you visit it?

Sadly — and impressively — the entire shooting of The Jungle Book took place in a Los Angeles film studio, and most of the surroundings were digitally rendered. A few of the settings in Neel Sethi's scenes, as he played Mowgli, were built, but mostly, the magic was in the green screen. "If the kid was walking 12 feet, we built 12 feet of jungle," director Jon Favreau told Variety. "Each set was built for a single shot."

So, sure, the King Louie scene wasn't filmed in a real temple. But The Jungle Book goes back to Disney's original version of it in 1967, and then even further back, to when Rudyard Kipling first wrote the story in 1894 (yeah, that's right, The Jungle Book is over a century old). Was the monkey temple at least based on a real temple?

According to The Telegraph, Kipling actually never visited the Indian jungles depicted in The Jungle Book. The author was born in Bombay, but at age five, his family moved back to Britain. Later on, Kipling returned to India for seven years to work as a journalist, but he was based in Shimla, and far from Kanha and Pench national forests (the most Jungle Book-esque location in India). As travel writer Stephen McClarence wrote in a recent column,

In truth Kipling never visited this part of India and based his jungle descriptions on other books, photographs and conversations.

Not that that's stopped people from searching for a similar Jungle Book setting, which recently led Taj Safaris in India to launch two travel experiences called "Mowgli's Trails." One takes place in Kanha National Park, while the other snakes its way through Pench National Park, both in the state of Madhya Pradesh. According to Travel Daily Media, the travel experience includes rides through the jungle to spot wildlife, visits to tribal villages, Jungle Book trivia, and stargazing.

No word on whether temple trips are included in the experience, but luckily, India has many temples to its name and quite a few are in Madhya Pradesh. Monkeys are easy to find, too, but beware — they can be Shere Khan scary if you're holding something tasty.